Conservative blogger Charles C. Johnson, who has made it his job to discredit the character of 18-year-old Michael Brown, who was shot and killed by Ferguson, Missouri police officer Darren Wilson last month, is out with a new supposed bombshell report that uses uncovered photos and comments from Brown’s Instagram account to somehow prove the young man had a “violent streak.” 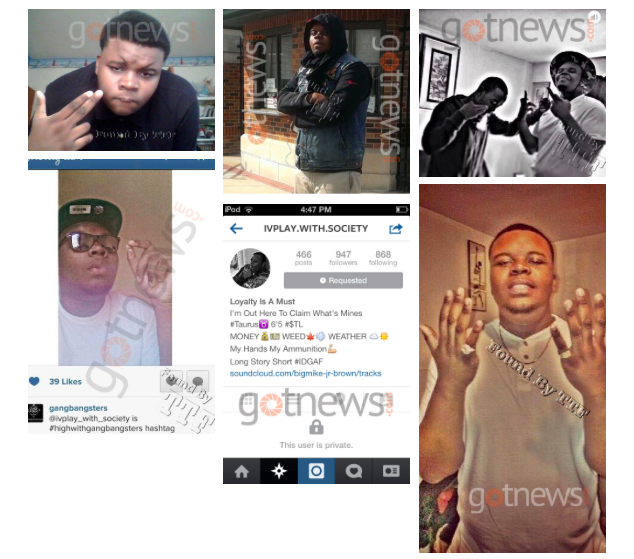 In stark contrast to the “gentle giant” portrayed in the national media Brown’s social media accounts reveal a misogynistic young man obsessed with drugs, money, and violence. He described his interest in “money, weed, and weather” on his Instagram.

Brown’s Instagram account also shows a violent streak that may help explain what led to a violent confrontation with Police officer Darren Wilson. “I’m Out Here To Claim What’s Mines,” Brown wrote on his Instagram profile. Brown’s bio included the eery line, “My Hands My Ammunition,” a statement made all the more creepy given his participation in a strong arm robbery.

The titles that Johnson gave to the images he posted on his site — “Mike Brown Getting Ready to Bust a Cap” and “Mike Brown Showing His Treyvon [sic] Style Black Hoodie” — also speak volumes.

Previously, Johnson petitioned a St. Louis court to get Brown’s juvenile records opened, claiming to have multiple sources who said he was involved in a second degree murder case. When the St. Louis Post-Dispatch, who submitted a separate petition for the records, reported this week that Brown was not facing any serious felonies charges at the time of his death, Johnson accused the paper of misrepresenting the facts.

Gawker’s Adam Weinstein drew attention to this recent series of selfies posted on Twitter by Johnson, demonstrating that anyone can look like a “thug” in the right context:

If smoking cigars is bad for you why do we look so cool when we do it? pic.twitter.com/HpuhA1VNmI