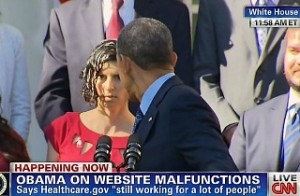 Newton’s third law needs a rewrite: for every action, there is a nutty conspiracy theory saying said action wasn’t what you thought it was. Case in point, remember the woman who fainted at President Obama‘s big speech this week? Well, there is a conspiracy theory going around that the whole thing was… yep, a hoax.

Karmel Allison, a pregnant woman with Type 1 diabetes, fainted and Obama caught her as she collapsed.

Or rather, that’s what they WANT you to think. The Weekly Standard flagged a blog post by someone who argued that the incident was not what it seems.

You will see in the following video that the pregnant woman is standing with a friend who is holding her hand with her arm wrapped around her waist. That is until she starts to “faint”. Then she steps slightly aside and never even looks at the women she is holding. She smiles a nervous smile for the camera because she has done her part in this extremely poorly orchestrated drama.

Why would they come up with this transparent attempt to manipulate the low information voters? Who knows? Did it make anyone feel warm and fuzzy for our hero President? Probably. There are a lot of idiots out there.

Media Matters chronicled how this has gotten a lot of play on the fringe, and one brief mention on Fox, but it was really pushed into the mainstream thanks to a Facebook post by Sarah Palin.

In the post, Palin says she finds it “hilarious,” and while she did not say at any point she believed it was a hoax, she did end up giving it a platform and acknowledged why people would be prone to believing it.

With the Obama White House’s total lack of transparency, it’s no wonder that some will ask whether they staged even a fainting lady in the Rose Garden. What was once a major leap in logic has become a single step because President Obama has lied so often and so blatantly.

In case you’d like to go all Zapruder on the footage yourself, here’s the video of the initial incident, via CNN: