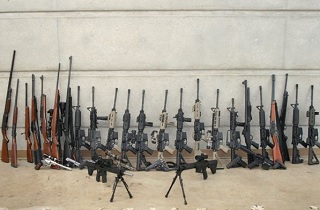 While the mere prospect of a President Barack Obama, and then the reality of said president’s election, caused gun sales to skyrocket in the U.S., the horrific mass shooting in Newtown, Connecticut sent them into high-Earth orbit, according to reports. With a shrinking number of Americans tooling up for the coming war with the tyrannical government we democratically elected, there is one glimmer of silver lining on those clouds of assault weapons: the sharp increase in firearms sales has allowed, and will soon enhance, the state of California to confiscate guns from people who shouldn’t have them.

To be fair, it doesn’t seem like much is required to draw that dwindling throng into the gun shops and gun shows of America. Despite the fact that the first four years of the Obama presidency saw only one piece of gun legislation enacted, a measure to allow the carrying of firearms in national parks, the National Rifle Association continued to exploit fear of gun control to juice gun sales, and to not get Mitt Romney* elected. Now that a horrific tragedy has Congress poised to do next to nothing, gun owners are rushing out to buy even more guns, including a macabre demand for the Sandy Hook Special. That sea of arms promises to render even the strictest federal assault weapons ban moot without a well-regulated grandfather clause and seizure of prohibited weapons.

Gun rights advocates call that “confiscation,” with all the venom of more well-known C-words, and they point to the case of a man who voluntarily turned in his guns when he was misidentified by New York State as a “prohibited person” as an argument against such seizures. Newly-passed New York state law allows the state to seize weapons from people who are reported to be a threat to themselves or others. Mistakes like this are bound to happen, but they’re easily fixed, and are a price I’m willing to pay to keep guns out of the hands of people who are really mentally unstable, or are violent felons, or domestic abusers.

In California, that price is being paid, in part, by the very same paranoia-fueled mobs who rail against the evils of “confiscation,” and if the California legislature succeeds, they’ll be paying even more for it soon. The California Department of Justice maintains a “Prohibited Armed Persons File,”culled from a database called the “Armed Prohibited Persons System,” which was completed in 2007, and which currently contains the names of over 19,000 people who are prohibited from owning firearms, but who currently possess over 40,000 guns, including over 1,600 assault weapons. The program is grossly understaffed, carried out by a team of only 33 agents who don’t have search warrants, and have to sweet-talk their way into these peoples’ homes:

Conservatives have pushed back against the program using the familiar anecdotal hustle, pointing to a man, named David Phillips, whose guns were confiscated because his wife, Lynette Phillips, was on the list. Mrs. Phillips admitted to reporters that she had been held involuntarily in a mental hospital, but insisted the hospital’s personnel exaggerated the risk. Unlike all of the other mental patients who are fine with their detention. She told TheBlaze.com that “the nurse had recorded that she was involuntarily admitted and indicated she might be a suicide risk,” but claimed “the nurse had put words into her mouth.”

Her husband’s weapons were seized because, according to Bloomberg News, “’The prohibited person can’t have access to a firearm,’ regardless of who the registered owner is, said Michelle Gregory, a spokeswoman for the attorney general’s office.”

Now, you wouldn’t expect anyone to be happy about having their guns taken away from them, but doesn’t it make sense that if a person has been judged mentally unstable, if they’re a risk to themselves or others, that they not have access to firearms? If a psychiatric hospital is not qualified to make that judgment, who is? Apparently. the conservative media thinks the mental patients and their co-dependents are. California residents also have a process by which they can appeal determinations like these.

California’s understaffed, underfunded confiscation team is, ironically, funded by a surplus in the fund that collects fees from gun stores when they run background checks (called the “Dealer’s Record of Sales” or “DROS” fee, a surplus that California Attorney General Kamala Harris chalked up, in part, to a 30% increase in gun sales from 2007-2011. Since then, that surplus has grown, and California’s State Senate has passed a measure to divert an additional $24 million from that fund to the confiscation program, with the aim of doubling its current staffing level. So, the next time you purchase a gun in California, you might be helping to pay the salary of the agent who is going to come and take it away from you.

Gun rights advocates think that’s a bad thing, and since they have been getting their way at the federal level since forever, the estimated 200,000 people who currently, legally possess firearms even though they shouldn’t, will never have to worry about having those guns taken away from them.