Corn and Engberg Claims About O’Reilly Both Politically, Personally Motivated 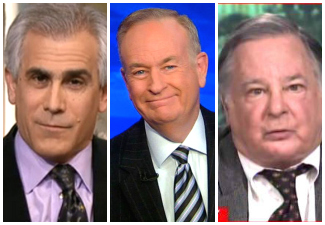 Upon watching the Bill O’Reilly controversy (or lack thereof) unfold over the past few days, it’s hard not to keep going back to the same theme:

As in: Is the Mother Jones story (or non-story) one in search of simple truth or is it a hit piece politically or personally motivated by writer David Corn? The “liberal Mother Jones versus conservative Fox News” theme could suffice as motive on the surface, but this onion seems to have a few more layers to it, and it stinks.

As few are noting, Mr. Corn worked for Fox News as a contributor from 2001-2008. His career would end abruptly there, as the network decided not to renew his contract (which is a nice way of firing someone). Corn would go on to make an impact in the 2012 presidential election after receiving that infamous tape of Mitt Romney‘s “47 percent” comments. It’s still hilarious to see all the acclaim Corn got for basically signing for a FedEx package and uploading a tape to the Mother Jones website. He even won a Polk Award for the effort, even though it was Jimmy Carter‘s grandson who introduced the guy who actually recorded Romney (Scott Prouty) with Corn. Talk about a silver platter, but that never stops Corn from still mentioning it as if he’s trying to beat some kind of quota when appearing on MSNBC, where he serves as a contributor.

So when we look at why Corn would refute O’Reilly’s account of his time working for CBS in Argentina as a reporter covering the Falklands War in 1982, keep all of that in mind in terms of personal and political motivation. As for finding fault in O’Reilly’s account, this appears to be a case of semantics. Note: O’Reilly never said he was on the Falkland Islands, as the Corn piece claims — he’s been consistent in stating he was always in Argentina (Buenos Aires) at the time.

Skeptics — largely from left-leaning blogs — charge that Argentina wasn’t part of the war zone, therefore making O’Reilly a liar for stating he was. But protests there following the war did turn violent. In an internal CBS memo to then-Buenos Aires bureau chief Larry Doyle, the network characterized those protests as riots:

Doyle, O’Reilly didn’t have the time last night but would like to say many thanks for the riot piece last night. WCBS-TV and WCAU-TV both took the entire piece, instead of stripping it for pix. They called to say thanks for a fine piece. Thanks again. Your piece made the late feed, a winner last night.

At the time, as reported in the New York Times, Argentine soldiers fired into crowds. Protesters stormed the presidential palace. A CBS photographer got caught in the chaos and O’Reilly — citing blood coming from his ear and being injured — “dragged him out of there.” Add it all up, O’Reilly was covering the Falklands War from Argentina (as almost all reporters were), and while the riot that occurred after Argentina surrendered wasn’t technically in the war zone, it certainly had the elements of one during that particular riot. Again, semantics.

And for Corn to write that O’Reilly claimed to be on the Falklands is patently dishonest, which may explain why major media —outside of Fox’s rival CNN and its media critic Brian Stelter — has largely dismissed this story as the nothing-burger it is.

Late yesterday, O’Reilly’s former CBS colleague Eric Engberg made the claim that O’Reilly might as well been at a spring break destination by saying, “It was not a war zone or even close. It was an ‘expense account zone.'”

Of course, very few are exploring motive here when it comes to Engberg either. For those keeping score at home, this is a very easy dot to connect as to why Engberg — who called O’Reilly a “bloviator” in his opening sentence of his “revelation” — suddenly felt compelled to come forward.

As many of you know, Bernie Goldberg is a Fox News Contributor — primarily dissecting stories focusing on media on The O’Reilly Factor and Kelly File. Goldberg also worked for CBS News as an award-winning reporter for 28 years, where he complained about internal liberal bias to upper management within the organization with no success.

Here’s what happened after Goldberg decided to share his perspective with the general public per a 2002 book review of Goldberg’s best-selling Bias by the Houston Objectivism Society’s Warren Ross:

In 1996, he (Goldberg) “went public,” publishing an Op Ed in the Wall Street Journal accusing CBS of bias and fully critiquing an Eric Engberg story supposedly providing a “reality check” on Steve Forbes’ flat tax proposal. Despite the story’s billing as “news,” Goldberg noted that it used all the following techniques of distortion: loaded words (“scheme” and “elixir”), omission of anyone supporting Forbes’ idea (though a number of prominent economists were available), omission of affiliation of “experts” opposing the idea, and snide characterization (Engberg called it a “wacky” proposal that should be tried first in Albania). Goldberg used this egregious example as a starting point to support a broader charge of left-wing bias at the networks, and to explain why the big three TV networks were losing viewers.

Engberg has complained for years about Goldberg singling him out. So what better way to get back at Goldberg and smear O’Reilly and Fox News in the process by disputing O’Reilly’s claim about a riot that absolutely did happen and was even a lead story at the time on the CBS Evening News? Again, motives are worth bring into question. Engberg was invited on O’Reilly’s show on Monday to debate the topic, but he predictably refused (he did have time to appear on Reliable Sources for 30 minutes on Sunday morning). After all, would be hard to win such a debate with things like internal CBS memos and video supporting the host of the program.

Here’s the net-net of the Corn column: Come Tuesday, this story will be dead. Unlike Brian Williams — whom O’Reilly was actually more compassionate to than most during his downfall — the Factor host will not be suspended, reprimanded or even scratched by this non-troversy.

Welcome to the Hunger Games that the media has become in 2015: A polarized game of survival where media members are taking sides against each other.

And the general public yawns at the ridiculousness of it all.