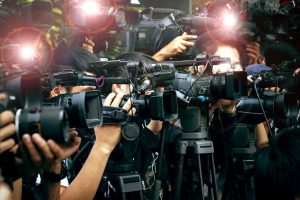 The corporate media has been abuzz recently about the surge of fake news stories tainting our digital ether, cautioning consumers against being conned by those pushing fantastical falsehoods online.

The glaring problem with this: the messenger.

As reflective as the Democratic (and Republican) establishment should be in the aftermath of the Trump-nado that swept itself into the White House, the elites in our media should be looking themselves in the mirror morning, noon, and night, perhaps more than any other institution in the U.S.

Complacent for decades in a system of its own tone-deaf creation, political media elites have long operated by chasing the “horse race” of he-said, she-said politics—or in Trump’s case, he-tweeted, she-tweeted.

As one election ends and coverage of the next one begins annoyingly earlier each cycle, New York and D.C.-based “journalists” have become human echo-chambers, pontificating 24/7 on cable and digital platforms about the never-ending “narrative,” playing scorekeeper to the fun game of who’s up and who’s down.

These scorekeepers all do this from the comfy confines of cable news studios and towering NY-DC newsrooms, completely isolating themselves from the struggling and frustrated Americans that just sprung a reality-TV-star-turned-quasi-fascist into the White House.

Hailing from two of the top media markets on the planet, they all make very good money, naturally connecting them closer to other elites than blue-collar and displaced workers in Michigan, Wisconsin, Pennsylvania, and Ohio.

This complete disconnection between the mainstream media—which is supposed to hold the powerful accountable on behalf of the American people—and the actual American people, is the key reason younger (and a significant amount of older) Americans have fled traditional news outlets for independent media like The Young Turks, which isn’t shackled by out-of-touch and self-interested corporate parents trying to maintain the economic status quo.

Take Sunday’s “Meet the Press” as a basic example. To moderator Chuck Todd‘s credit, he took the rare step of actually going out into the country, doing a series of interviews from Macomb County, Michigan. Macomb, which Trump won 54% to 42% over Hillary Clinton, and is predominately white, has become a symbol for this election’s seismic sea change that saw Barack Obama voters switch sides to Republican.

But let’s get real: how many times do you expect notable media figures like Todd to voyage out to small town America to report on working-class struggles once Trump gets sworn in, and the more tantalizing, easy-to-cover horse race begins anew.

It’s not only the stories shows like Meet the Press cover, or don’t cover, that’s the problem. It’s the same old, same old talking heads they offer.

Sunday’s panel featured the glaringly out-of-touch New York Times columnist Thomas Friedman; glaringly-obsessed-with Hillary Clinton president of  the Center for American Progress Neera Tanden, who WikiLeaks exposed as a vicious political animal rather than an actual progressive; and two members of your country club journalism crowd—Washington Post  columnist Kathleen Parker and reporter Robert Costa (I traveled on the same bus with Costa covering Trump and Sanders-he’s one of the least arrogant of the mostly self-absorbed Beltway journalism elite).

And Meet the Press is just one of many legacy media platforms showering in the status quo rather than making inroads to understand and report on the stories causing the struggle of the majority of Americans.

No wonder most of these talking heads were shocked someone like Trump could win, and win easily: they’ve completely, and deliberately, detached themselves from what the rest of America is experiencing.

Half the country is poor. Those still considered middle class are buried in debt and living paycheck-to-paycheck. Families have lost connection to one another as parents work longer hours across multiple low-paying jobs. Even with Obamacare, which may soon be repealed, 30 million people are uninsured and even more are underinsured.

Amidst all of these realities, television news and digital sites bloviate about Vice President-elect Mike Pence getting booed at a showing of Hamilton, Trump tweeting at 3am, and the palace intrigue of who’s walking in and out of Trump Tower, and, gasp, what it means for his administration.

This derelection of duty is the reason the majority of Americans have no clue Pence has done nothing as thousands in a poor black Indiana neighborhood were poisoned by lead; or that hundreds of peaceful and unarmed water protectors in North Dakota have been arrested on bogus felony charges, assaulted by police with rubber bullets and pepper spray, and mistreated in jail—all in the service of protecting a greedy oil company’s right to build a pipeline on top of sacred Native American land while threatening the water supply for 18 million people.

So, how can these media mashuganas rebuild their credibility?

Start with widening the real estate. It won’t kill TV news outlets to open up vibrant bureaus in Detroit, Ohio, and other working class areas, staffing up with reporters who exist to expose corruption and spotlight average American struggle rather than living to ride in the horse race.

How about filling Sunday Show panels with less creatures of the establishment and more local and independent media reporters? (I know, radical!)

What about diversifying the on-air presence beyond color or gender to give platforms to folks outside the cocktail-crowd circuit—who aren’t “strategists” or “advisers” or “experts”?

But before any of this, corporate media will have to expand its definition of fake news.

And realize they’re creating much of it.
— —
Jordan Chariton is a Politics Reporter for The Young Turks, covering the presidential campaign trail, where he’s interviewing voters on both sides. He’s also a columnist for Mediaite and here’s his latest column. Follow him @JordanChariton and watch videos at YouTube.com/tytpolitics.
— —