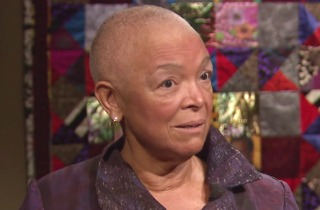 Camille Cosby, the wife of embattled comedian Bill Cosby, has been absolutely silent regarding the allegations against her husband. When the two of them did a joint interview, and Cosby was asked by an AP reporter about the score of women accusing Cosby of rape, assault, and sexual misconduct, she stayed completely silent.

But in her statement today, Camille Cosby scolds the media for not properly vetting the women accusing him. She says, “An accusation is published, and immediately goes viral.”

And that’s where Rolling Stone comes in. Cosby invokes the now-retracted story of a UVA student who claimed she was gang-raped. She noted how the press connected that case to the multiple women accusing her husband “until that story unwound.”

You can read her full statement here:

I met my husband, Bill Cosby, in 1963, and we were married in 1964. The man I met, and fell in love with, and whom I continue to love, is the man you all knew through his work. He is a kind man, a generous man, a funny man, and a wonderful husband, father and friend. He is the man you thought you knew.

A different man has been portrayed in the media over the last two months. It is the portrait of a man I do not know. It is also a portrait painted by individuals and organization whom many in the media have given a pass. There appears to be no vetting of my husband’s accusers before stories are published or aired. An accusation is published, and immediately goes viral.

We all followed the story of the article in the “Rolling Stone” concerning allegations of rape at the University of Virginia. The story was heart-breaking, but ultimately appears to be proved to be untrue. Many in the media were quick to link that story to stories about my husband––until that story unwound.

None of us will ever want to be in the position of attacking a victim. But the question should be asked––who is the victim?