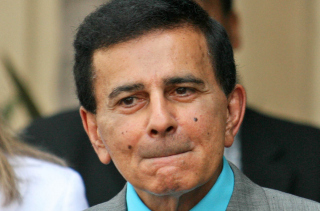 The Associated Press reported on Monday that a judge has ordered a probe into the whereabouts of Casey Kasem after his wife’s attorney had indicated the radio personality had been taken out of the country.

The 82-year-old former American Top 40 host has advanced Parkinson’s disease and reportedly can no longer speak. His wife, Jean Kasem, has been in choosing the facilities in which Kasem receives treatment. But Kasem’s children from his previous wife have complained that they have not been able to see their father in accordance with the deal established with stepmother Jean.

Los Angeles Superior Court Judge Daniel S. Murphy ordered a court investigator and adult protective services to find out where Kasem is being treated and report back to the court.

[…] Daughter Kerri Kasem had sought a temporary conservatorship and was appointed her father’s temporary caretaker on Monday. Her attorney, Troy Martin, said the family believes the entertainer has been taken to an Indian reservation in Washington state.

Murphy’s order came after Craig Marcus, an attorney who appeared on Jean Kasem’s behalf at Monday’s hearing, said he did not know where the radio personality was but knew that he had been removed from the country.

“I have no idea where he is,” Marcus said.

The revelation brought stunned protests from Murphy and two of Casey Kasem’s daughters, two of the entertainer’s three children from a previous marriage.

In accordance with the conservatorship, Kasem’s daughter will now have access to previously-sealed medical records. Another daughter Julie had previously attempted to gain oversight to her father’s medical care, but the case was dismissed after she came to a settlement with the stepmother. This most recent complaint accuses Jean Kasem of “elder abuse” by withholding her husband from his children.

Kasem is best known for his radio voice, having hosted classic countdown shows like American Top 40 and Casey’s Top 40. He was also a well-known voice actor, having provided the chops for Scooby Doo character Shaggy.