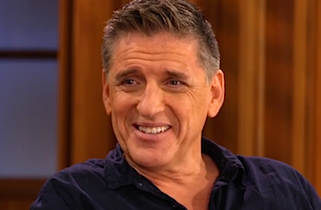 When CBS announced they were giving David Letterman’s Late Show to Stephen Colbert, it was a widely-expected but still unfortunate slight to Craig Ferguson, who has been hosting the Late Late Show on that network since 2005. Until now, Ferguson has stayed mostly quiet on how that choice influenced his decision to leave CBS at the end of his current contract and what he plans to do in the future.

In an interview for Ora.tv, Ferguson told Larry King that even if CBS had offered him Letterman’s spot, he wouldn’t have accepted the position. In fact, he had already decided it was time for him to move on before Letterman announced his own retirement. “I don’t think I would have, I don’t think I would have,” said when King asked him about the hypothetical scenario, before allowing, “Maybe.” But, he said the bottom line is that the didn’t offer him the job so he never got the chance to accept or reject it.

Ferguson said he is open to doing another, similar talk show, but “not right away.” Perhaps he could end up hosting a talk show that only appears online, as Chelsea Handler will be doing for Netflix starting in 2016. Or, for that matter, as Larry King now does for Ora.tv after his supposed “retirement” from CNN.

Watch a clip from the interview below, via Ora.tv: