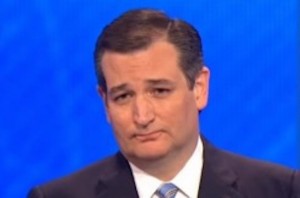 Republican presidential candidate Ted Cruz took a strong stance against his rival Donald Trump Thursday, denouncing his Twitter attack on his wife Heidi Cruz. “I don’t get angry often, but you mess with my wife, you mess with my kids, that’ll do it every time,” he told reporters. “Donald, you’re a sniveling coward. Leave Heidi the hell alone!”

That Trump is a coward ought to be obvious to anyone following the campaign; no other candidate dropped out of a debate (twice) because they were too scared to face a female reporter. Likewise, only Trump couches his worst attacks in weaselly ways to avoid taking responsibility for them (consider how many of his most reprehensible statements have been “just a retweet” or something “others have said”).

But Cruz isn’t exactly the one to talk here. The same day he called Trump a coward, he basically admitted that he was one himself. When asked by WTMJ’s Charlie Sykes Thursday why he embraced Trump so often early in the race, Cruz bluntly said it was a political calculation. [h/t Buzzfeed]

“Well, listen, there is a season to politics. Today is actually the one-day anniversary of when we first launched our campaign, we launched it on March 23, 2015.

If you look at– when we started, there were 17 candidates in this race. It was a wonderfully diverse, talented, dynamic, young field. It [had] really incredible talent. If you look at the number of the candidates that took on Donald Trump early on, they ended up as roadkill.

Our objective was simple from the beginning, it is to win this race, to win the nomination and then beat Hillary Clinton and turn this country around. And not be roadkill. I am very strongly committed on the anti-roadkill approach. And so our approach was quite simple; we needed to build our base first.”

So Cruz is openly admitting that the reason he didn’t stand up to Trump for half a year was because he was worried that Trump would sink his campaign. Sad!

All politicians take part in this kind of political maneuvering of course, but this is Ted Cruz we’re talking about. Here’s the guy who managed to royally piss off basically every major player in Washington, D.C. He’s made a political career out of being the spanner in the works, the man proudly standing up for his principles against even the powerful figures in his party. But the man so willing to risk political fallout and burn bridges with Mitch McConnell and John Boehner was afraid of angering a barely literate orangutan.

Hey, speaking of “actions of fear,” how did Cruz respond to Trump’s chauvinism early in the race? You know, after Trump called Megyn Kelly a bimbo and implied she was on her period? Or when he attacked Carly Fiorina, saying she couldn’t be president because she was unattractive? Actions that he would now have us believe are beyond the pale?

The Establishment’s only hope: Trump & me in a cage match.

But now Cruz’s wife is the target, and he’s somehow making a principled stand. Why, it all reminds me of a poem…

First he came for Megyn Kelly, but I remained silent, because I needed the misogynist vote

Then he came for Carly Fiorina, but I remained silent, because I knew I’d get her endorsement anyway

But then he came for my wife Heidi, so vote for me and visit my website at TedCruz.org, that’s TedCruz.org

I say this all, by the way, as a conservative who also openly urges all Republicans to vote for Cruz in all upcoming primaries. I can’t say if Cruz will or should win a contested convention, but I don’t doubt that every contest he wins blunts Trump’s inevitability. And to paraphrase Churchill, if Donald Trump attacked Lucifer, I would at least make a favorable reference to the devil in this column.

But I also hear a lot of grumbling from Cruz supporters who can’t understand why supporters of Fiorina, Jeb Bush, and Marco Rubio can’t just get on board and back Cruz. Well, this is a perfect instance of why. You’re asking the anti-Trump coalition to back a man who coddled, obfuscated, and praised when others were risking their political futures by denouncing Trump. Now he wants to be rewarded for his cowardice while making no secret of it.

So yes, millions will take a stand and pull the lever for Cruz in the primaries and, ojalá, the general election. But let’s not pretend Cruz is the principled choice. Unfortunately, this entire election appears designed to make hypocrites and cowards of us all.