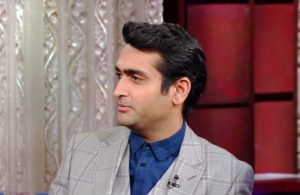 In a series of tweets earlier today, Silicon Valley actor Kumail Nanjiani described a confrontation with a couple of Donald Trump voters at a Los Angeles bar last night.

Nanjiani, who was born in Pakistan, was at the bar with his friend and co-star Thomas Middleditch when the two men, who he stated were white and in their 20s, approached them and told the two actors they were big fans but wrong on Trump.

Was at a bar last night with @Middleditch. At the end of the night, 2 white dudes, 20's, who'd been there for hours came up to us.

"We're big fans of you guys. (To Thomas) I trolled you on twitter yesterday." He goes on to say how we're wrong about Trump.

When Nanjiani said he didn’t want to talk about politics, things got heated quickly.

He starts getting in my face. Thomas puts his hand on the dude's chest to stop him. "Don't touch me you cuck. Wanna go outside?"

At this point, the bouncer runs over, grabs them, kicks them out. The bartender is awesome & apologetic. Thomas & I are stunned.

While Nanjiani praised the bartender and bouncer for acting quickly, he reflected how things are probably much worse in other parts of the country.

This happened at a bar in LA surrounded by ppl. I can't imagine what it must be like to be someone who looks like me in other parts.

We can't let hate/racism/bigotry/sexism be normalized. If something happens, be safe, but let it be known we won't stand for this.

Many ppl are like "just cuz I voted for Trump doesn't mean I'm racist/sexist." Ok, but at best, you ignored it, you overlooked it.

We thought Internet would give us access to ppl w different points of view. Instead it gives us access to many ppl w the same point of view.

Since Trump’s shocking upset of Hillary Clinton, there have been a number of racist incidents reported, with the Southern Poverty Law Center listing more than 200 actions of harassment and intimidation since the election. There have been some hoaxes, however, with one Muslim woman making up a story about being assaulted by a Trump supporter.

At the same time, there have been reports of violence against Trump supporters and some anti-Trump protests across the country have resulted in injuries and property damage. Recently, a photojournalist was attacked at a protest in Oakland.