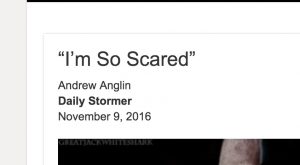 The Daily Stormer is a website that is unabashedly a neo-Nazi haven. Their current site banner is vandalism that features a swastika and the words “MAKE AMERICA WHITE AGAIN.” They are the same site that called for a “crusade” against Breitbart‘s Milo Yiannopolous and they’ve been supporters of Donald Trump for a very long time, seeing him as someone who can help further their goals of, well, making America white.

They are reveling in the fear expressed by minorities in the wake of Trump’s win. In fact, they posted a list of Twitter users who have expressed fear for their safety and editor Andrew Anglin encouraged his readers to troll them in the hopes of getting “them to kill themselves.” We will not link to the original post, but USA Today is reporting on it and we have seen the post ourselves.

Some of the tweets say things like, “As a victim of sexual assault, I’m so scared of what’s going to happen to this country,” and, “I’m so scared for people of color. I’ll be there for you. I will fight for you. We won’t let corruption and injustice go unnoticed.”

You can troll these people and definitely get some of them to kill themselves.

Just be like “it’s the only way you can prove to the racists that Hillary was right all along.”

“Mass Suicides After Trump Victory” would be a headline the media would play up, but all it would do would demoralize the left even further.

He finished off the post with a photo that shows an image of Pepe the Frog covered in tattoos that symbolize a belief in white supremacy. Pepe is holding a gun to the head of a blindfolded woman. Her blindfold says “SLUT” and the Tumblr logo is visible on her head.

One of the comments under the post reads, “I honestly feel like my grandfather right now who fought in the Wehrmacht. We did it… RIP Grandpa.” Another says, “The time of the [social justice warrior] is over. The time of the white man has come.”