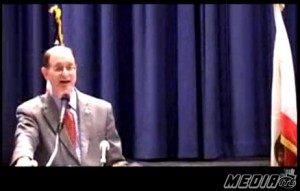 Mission: Accomplished. In a search for a sequel to last year’s Summer of Angst over health care reform, the “manufactured menace” of a New Black Panther-controlled election has gripped California’s 27th District. In a video featured on Fox News earlier yesterday, Rep. Brad Sherman (D-Ca) was asked about the case, to wild applause. The applause, however, turned to jeers at his assurance that the DOJ is not anti-white, and hysterical jeering when he said he didn’t know about the NBPP case. It’s gonna be a long summer.

And so, it begins. The same people who were scared stiff that uninsured deadbeats might get access to the same government health care that they have are now nearly apoplectic that the Obama Justice Department is somehow sticking it to the White Man. When will Whitey catch a goddam break?


This reaction is exactly what this story is designed for, and is the culmination of a two-plus year campaign to, in my opinion, unfairly conflate the New Black Panther Party with President Obama, and raise the specter of a nation in the grip of black militancy.

During the 2008 presidential campaign, opponents of then-Senator Barack Obama repeatedly tried to conflate him with the NBPP by virtue of a web page in an open Barack Obama forum, one that was subsequently removed. On Election Day, the McCain campaign tried to exploit what everyone agrees was an isolated incident, while the polls were still open. The story cooled quickly, and rightly so. These were the actions of a single individual, and were considered nothing more than a nuisance by the Philadelphia police, who simply asked him to leave.

Contrary to what some are reporting, the Department of Justice provided detailed legal explanations for dropping the judgments against the New Black Panther Party, its Chairman, and the unarmed poll-watcher, but it’s really common sense. There is no evidence to support those charges. I spoke to NBPP Chairman Malik Shabazz days after the incident, and he fully admitted to having sent party members to over 300 polling places throughout the country, all in predominantly black districts, with strict instructions to act within the law. If his mission was in fact to intimidate voters, that makes about 299 disobedient New Black Panthers.

That is not to say that media outlets shouldn’t be covering this story. As has been pointed out on this site that the injection of race makes this a third-rail story, but that doesn’t mean it can’t be handled responsibly. As is often the case, the focus here is on whether the story should be covered, and not how it is covered.