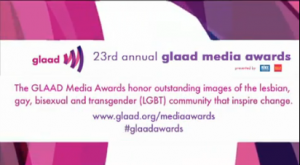 Today, The Gay & Lesbian Alliance Against Defamation (GLAAD) announced its nominees for the 23rd Annual GLAAD Media Awards, which seek to “serve as a benchmark for the media industry and complement GLAAD’s work to bring LGBT images and stories to Americans.” This year’s list of 151 nominees includes 35 Spanish-language stars, shows and films.

Of the broadcast networks included this year, ABC far surpasses its competition with a total of 8 nominations, with CNN and Showtime leading the cable news pack with 3 nominations each. Univision beats out other Spanish-language networks with its 8 nominations. And on the print and digital front, The New York Times garnered a total of 4 nominations, as well as one for its online home, NYTimes.com.

And here are the nominees in video form, via GLAAD.org: