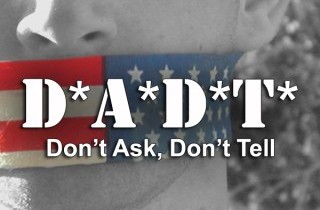 Last September, President Barack Obama repealed Don’t Ask Don’t Tell, the 1993 law that prohibited lesbians and gays from openly serving in the military, and so far the change hasn’t led to any negative consequences for the armed services. The first academic study on the new policy has just been released and reveals that the repeal “did not harm the military, and if anything made it easier for the Pentagon to pursue its mission.”

The study, created by the Palm Center, counters initial concerns by thousands of military officers, who attested that allowing openly gay people to enlist would hurt “troop readiness, undermine recruiting and retention…[and] have adverse effects on the willingness of parents who lend their sons and daughters to military service,” among other things. The researchers, some of which are professors at a couple of the U.S. military academies, concluded that the repeal was a non-event after chatting with 553 generals and admirals who worried that the repeal could undermine the military, people against the repeal, watchdog groups and more than 60 active-duty gay, lesbian, straight and bisexual troops from each military branch. The authors also conducted surveys and observed military units as part of their research.

“For almost twenty years, experts predicted that allowing gays and lesbians to serve openly would harm the military. “Now the evidence is in, and the conclusion is clear: repealing ‘don’t ask, don’t tell’ did not harm the military, and if anything made it easier for the Pentagon to pursue its mission.”

[I]t is disheartening to learn that the GOP now says that the military should not be used for social experimentation, because that has always been code for an endorsement of discrimination. And it is equally troubling that the GOP intends to look at military personnel policy and use administrative means to address “problems,” because that could very well be code for a plan to bring back discrimination.