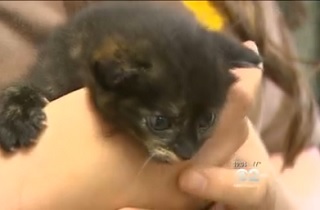 In a characteristically insightful reaction to the senseless, sickening killing of Australian baseball player Chris Lane by “bored” Oklahoma teenagers, conservative radio host Dana Loesch retweeted a story about a “bored” teenager in “Chicago” (the kitten-killer actually lives in Indiana) who killed three kittens with a compound bow, and posted photographs of his victims on Facebook. The point of this exercise is anybody’s guess, but according to Loesch, these two stories indicate that “guns aren’t the problem.”

She then followed up with these:

Does President Obama have another imaginary son who maybe would look like Christopher Lane?

Guns aren’t the problem in #BoredTeens. The problem is parents who utterly failed to teach their children respect for life.

The story she’s referring to is this one, about an unidentified Indiana 17 year-old who admitted to killing three kittens with his compound bow because he was “bored.”

As I wrote earlier, it’s too early to try and draw conclusions about the Chris Lane killing, although that won’t stop people from trying. One conclusion that seems impossible to draw is that “guns aren’t the problem,” a conclusion that isn’t aided by comparing the senseless murder of a 22 year-old human being with the equally senseless, yet proportionally less serious, killing of several kittens. Why anyone would use these two cases to draw any conclusions about guns is baffling, but if you’re going to do he math, the equation seems to go something like this: bored teens+guns=tragic murder, while bored teen+compound bow=three dead kittens.

Loesch is also engaging in the narrative that the killing of Chris Lane is somehow analogous to the killing of Trayvon Martin, despite the absence of any similarities whatsoever, aside from the one thing she has determined is not the problem: both Chris Lane and Trayvon Martin were killed with handguns. It’s unlikely that either killing would have taken place had the shooters been armed with a compound bow.

In the interest of consistency, though, I expect that once she’s figured out where Indiana is, Loesch will demand a denunciation of this crime by Ted Nugent.