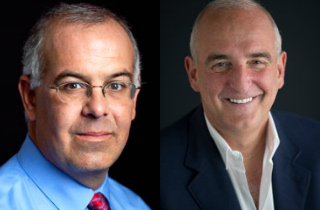 The headline to David Brooks’ Tuesday column, “Snap Out of It” — about the relative peace and stability of our time — is missing a subject. Who’s doing the snapping out?

It seems Brooks was pointing directly at fellow Times columnist Roger Cohen. In fact, Brooks’ post reads like a point-by-point refutation of Cohen’s piece from two weeks ago, “The Great Unraveling,” in which Cohen catalogued contemporary horrors from geopolitical disintegration to rising anti-Semitism to an enervated U.S. too deflated to stop ISIS to the plague (Ebola). “Until it was too late and people could see the Great Unraveling for what it was and what it had wrought,” Cohen closed.

By contrast, Brooks points out that the U.S.’s enemies are relatively puny (Putin and ISIS are only threats on the level of Hitler or the USSR if you brought your magnifying glass from home), that global poverty is declining, that the overall geopolitical trend is toward integration, and, most important, that New York City is safe for white people to go outdoors and get upscale barbecue. “We are living in an amazingly fortunate time,” Brooks wrote, before returning to his common trope of “whither elite leadership?”

But perhaps one Times column touting modern times coming two weeks after one bemoaning it is just a coincidence? “I mention all of this because of the despondency and passivity and talk of unraveling that floated around this summer,” Brooks wrote. Welp.