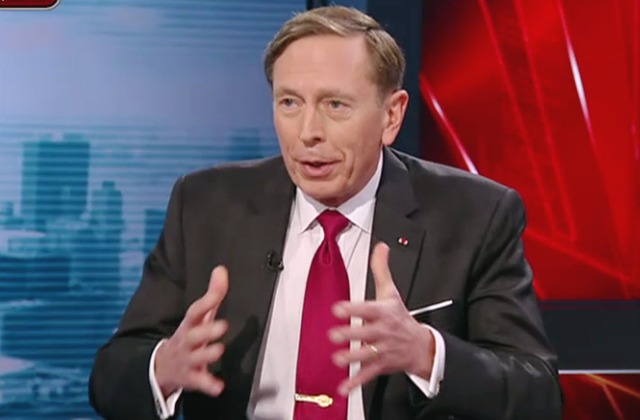 The search for a new National Security Advisor continues as Sean Spicer told the press this afternoon that David Petraeus is out of the running:

Spicer: “Petraeus is out” for NSA; meetings tomorrow w/ McMaster, Bolton, Caslen & Kellogg; “don’t have an update” on Odierno (via pool)

Despite his public scandal a few years ago, Petraeus is still highly-regarded enough by President Trump and many around him to be considered for the post vacated after Michael Flynn‘s resignation.

Trump had initially settled on retired Vice Admiral Robert Harward who turned down the position. Harward will be on ABC’s This Week tomorrow to speak out for the first time since that decision, but so far there’s been reporting he turned down the position because 1) the White House didn’t meet his conditions, and 2) he watched Trump’s press conference this week.

And a report in The Wall Street Journal yesterday says that Petraeus is out of the running because he too had conditions the White House wouldn’t meet:

Former CIA director David Petraeus said anyone considering the national security adviser job in the Trump administration should have control over personnel and the White House would commit to a disciplined process of crafting security policy… An official briefed on the search for a NSC adviser said Mr. Petraeus was no longer being considered because the White House thought his demands were unreasonable.