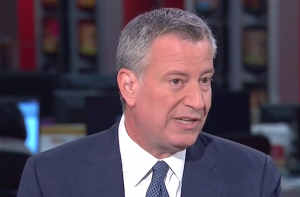 “If Donald Trump thinks he’s going to be able to deport people out of New York City he’s got another thing coming,” de Blasio told WNYC’s Brian Lehrer, adding he is “not going to allow innocent people to be forcibly deported from this country.”

Lehrer asked de Blasio if he “would you actively resist” Trump’s immigration plan.

Under Trump’s proposal — which he detailed during Tuesday’s FBN/WSJ debate — the United States would forcibly deport 11 to 12 million immigrants. Trump evoked President Dwight D. Eisenhower‘s “Operation Wetback” during the debate, a controversial program where migrant workers were shipped to Mexico via train.

“This is outrageous and we really need to fight this right now,” de Blasio said. “Because what he is saying––to call it un-American is an understatement. It is inhumane.”

De Blasio noted that Trump’s immigration example is “a plan that is inhumane, that was proven to be in so many ways immoral, which led to the deaths of so many people,” adding that if the United States engages in mass deportation, “we have lost our moral authority in the world.”

De Blasio said the U.S. “can’t be the nation of immigrants and the beacon to the world” if Trump’s plan comes to pass.