Democrat Doofuses & Joker ‘Journalists’ a Match Made In Establishment Heaven 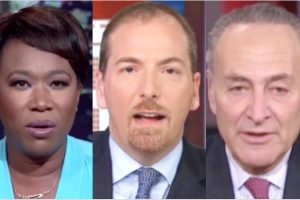 As the corporate media has continued its 24/7 coverage of President-elect Trump, very little serious coverage of the real causes of the Hillary Clinton-led Democratic debacle has been offered.

Sunday’s “Meet The Press” was a perfect example.

In a discussion about what direction the Democratic Party takes in 2017, moderator Chuck Todd had on the same corporate journalists who were so miserably wrong about Clinton’s inevitable clobbering of Trump—and completely ignorant of the visceral economic hopelessness and anger swarming the country—to talk about, wait for it…the future of the Democratic Party!

Yes, while the media is at it, they should invite Michigan Governor Rick Snyder on to share his expertise on urban water systems, or now ex-North Dakota Governor Jack Dalrymple on to offer the playbook for other governors to form better relations between government, police, and Native Americans.

Washington Post reporter Robert Costa, who’s terrific at breaking the palace intrigue news inside Trump Tower the Beltway crowd lives for, previewed the “ongoing civil war” within the party between the Bernie Sanders wing and the more establishment wing.

Missing from Costa’s punditry was, gee gosh jolly, that Sanders wing was right all along about the mood and pain of the electorate—and sported the only candidate projected to beat Trump by double digits in a head-to-head matchup.

NBC News reporter Katy Tur, who had the tough job of covering Trump for a year-and-a-half on the road (and did a decent job), posited: “Who is the Democratic Party?…they have to find an identity and they’ve gotta find somebody to rally behind.”

Profound, I tell you.

But the best of the tone-deaf best was MSNBC’s Joy Reid, who I happen to like as a person from my days booking her as guest on MSNBC.

Reid, who’s evolved from being, at one time, fairly progressive, into your average, cardboard-cut-out-cable-news-talking-point-Pez dispenser, dropped one of the establishment’s favorite talking points, used throughout the primary to discredit Sanders.

He’s not even a Democrat, so how can he lead The Democratic Party?

Yes, because the large number of President Obama voters who switched to a reality-TV-star clown cared what party he came from.

And the millions of millennial voters the Democratic Party has repelled are intensely focused on the party label of Sanders, or any candidate for that matter.

This kind of lazy, unimaginative punditry isn’t unique to Reid—it’s standard operating procedure to become one of the bastions of Beltway “journalism.”

The kind that comes predominately from folks in New York and Washington, D.C., who make oodles of money to rinse and repeat on cable news, and never take the time to actually voyage outside their echo chamber to find out what the American people are actually thinking and feeling.

But, Jordan…there’s polls! And focus groups. And town halls with heavily scripted questions.

Your head hurt yet?

If Reid, and pundits like her, stepped outside their bubble, they’d realize the millions of voters who voted for Sanders—and voted for Trump’s populist con-job—would have voted for a candidate from the Marshmallow party if they convinced them they were really fighting for working class interests.

But that’s the point: corporate Democrats, who, after their electoral disaster, have doubled down on Cold War hysteria in order to deflect from its own corporate love affair—and corporate journalists who make more in a week than most workers make in a year—have no interest in actually covering working class interests.

If they did, this Meet The Press segment would have led with the obvious: the direction of the Democratic Party hinges on whether the party breaks away from indentured servitude to its Wall Street, big oil, and big pharma sugar daddies.

How can you talk about the future of the Democratic Party with zero discussion of the electoral rejection the party just experienced, fueled largely because it ran a Wall Street-loved candidate at a time where Americans have finally woke up and wised up to the bought-off nature of our “representatives?”

Sure, Clinton did win the popular vote by three million votes, and if we lived in a country with a sane electoral system, she’d be president-elect. But, in the states that tend to matter in the electoral college, Democrats were rejected—because they’ve been exposed.

Trump didn’t win because he was a Republican. He won by largely running against Democrats and Republicans—on trade and foreign policy (neither of which he’ll actually keep his promises).

Sure, he obviously excited and drew out the considerable swath of the Republican base who loved having permission to engage in overt racism and misogyny, but that’s not why he will become president on January 20th.

He’ll take over the Oval Office because he was the only candidate, disingenuously or not, who stated the obvious: from Jeb Bush to Clinton, our politicians are puppets, begging at the special interest alter to obtain power, and then mostly following instructions in order to keep that power.

Voters are hungry for politicians who will call out the corrupt system that has hijacked the U.S., and actually do something to change it.

Trump filled the former—as we’ve already seen by his cabinet appointments, he’ll definitely not execute on the latter.

But that won’t matter if these doofus Democrats and joker “journalists” don’t break their own indentured servitude—to the political and corporate establishment.

Until this happens, more salesmen like Trump will be able to fool the masses, simply by calling out the corruption ingrained in our politics—even if they are part of it.

Will they get away with it?  Only if the Democratic Party continues to refuse to admit to its own corruption—and transparently break away from it. And if mainstream media continually refuses to call them out for being bought-and-paid for.

I guess that’s too much to ask from folks trapped in makeup, bought-and-paid-for themselves.