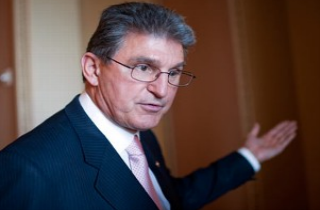 Senator Joe Manchin (D-WV), long-time NRA supporter who made headlines earlier this week for urging increased action on gun control is now dialing back his previous comments. “I’m not supporting a ban on anything,” Manchin said. He instead reinforced his praise of the gun lobby group, saying, “I’m so proud of the NRA, I’m so pleased they agreed to be part of this.”

In a radio interview with West Virginia MetroNews, Manchin was asked if he would support an assault weapons ban or restrictions on clip size. “I can’t say ‘yes’ or ‘no’ to any of the things,” he replied. Manchin went on to:

“Because all I’ve asked for, I want the NRA to tell me why we have any weapon you might want. Is there any grounds or any changes or anything they would like to look at? I don’t know. I can’t even get a conversation to have responsible people at the party, if you will, or the table, to finally come out with a conclusion.”

“These are my friends. They’re good people. They’re hurting. They’re in pain the same way as every American about what happened to these twenty little children. And I’m not going to let anybody be villainized.”

He called himself a “defender of the 2nd Amendment” and continued the interview discussing a renewed focus on video games and mental health.