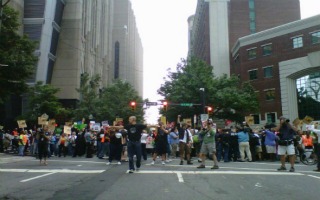 National Journal is reporting that President Barack Obama’s newly articulated supportive position on gay marriage and North Carolina’s recently passed gay marriage ban is making Democratic officials uncomfortable about hosting their nominating convention in the city of Charlotte. Given the depth of antipathy over North Carolina’s recent anti-gay vote among Democratic voters, the Democratic National Committee is advised to abandon the Tar Heel State before Democratic grassroots advocates descend on Charlotte for a mass protests that would only move more local voters into the waiting arms of the Romney camp.

National Journal writes that the Democratic activists are demanding the party’s nominating convention be moved from Charlotte:

Democrats who already were queasy about the site of their national convention could be excused after Tuesday’s election in North Carolina if they asked, “Tell me again just why we’re going to Charlotte this year?” … Almost immediately after the vote, more than 20,000 people signed a “move the convention” petition being pushed by a New York group called Gay Marriage USA. And Twitter accounts lit up with hundreds of angry tweets demanding the party pull out of Charlotte.

Politico is also reporting that the Democratic National Convention Committee co-chair Jim Rogers is equating the passage of Amendment 1 to the institution of Jim Crow laws – invoking a reviled past that is a living memory for many North Carolinians:

“We’ll look back with a clearer majority in the future, that this is exactly what it is,” Rogers told POLITICO on Thursday. “We’ll be as embarrassed of this Jim Crow law as we were of the Jim Crow laws in the 1860s, 1880s. Any time you deny people rights such as wanting to live together, I just don’t think it’s fair.”

National Journal also notes that there is a conflict of interest in Charlotte’s mega-banking industry and Democratic activists mistrust of large banking institutions – particularly those that were on the receiving end of Temporary Asset Relief Program (TARP) funds:

And, oh yes, there is the fact that President Obama will be accepting his nomination with a speech at the unfortunately named Bank of America Stadium, an occasion that will lead to a run of stories about the $45 billion that the banking powerhouse received in the unpopular TARP bailout.

Charlotte was the scene of a major Occupy protest on Wednesday which targeted Bank of America’s corporate headquarters. Between BoA and Amendment 1, the average Democratic voter could be consumed with hatred for their host state at the time of the convention – leading, potentially, to ugly protests that would project the image of Democratic voters vilifying their host city. This eventuality would almost certainly threaten President Obama’s tenuous hold on the state’s electorate and the negative effects could spill over into its electorally critical neighbor, Virginia.

Of the 4 million votes cast in the Tar Heel State, Obama won by just over 12,000. Many of the 61 percent of voters that cast their ballots for Amendment 1 were Democrats – African Americans voted by a 2:1 margin for Amendment 1 as did seniors, and it is likely that there is at least some overlap between those voters and Obama supporters. Given Obama’s small margin of victory in the state, there is simply no margin for error in this cycle.

The North Carolina convention has the potential to become a contentious affair that could collapse Obama’s polling support rather than provide the bump that conventions usually do for their candidate. The Republican’s preceding Tampa convention would appear the picture of harmony compared to the factious event the Democrats would host in Charlotte.

The Democratic Party is better off embracing the logistical nightmare that is abandoning the Charlotte convention and finding a new home – if they do not, they risk a public relations apocalypse in August.