Did Chelsea Clinton Forget That Hillary Fabricated an Attack on Herself?

Did Chelsea Clinton Forget That Hillary Fabricated an Attack on Herself? 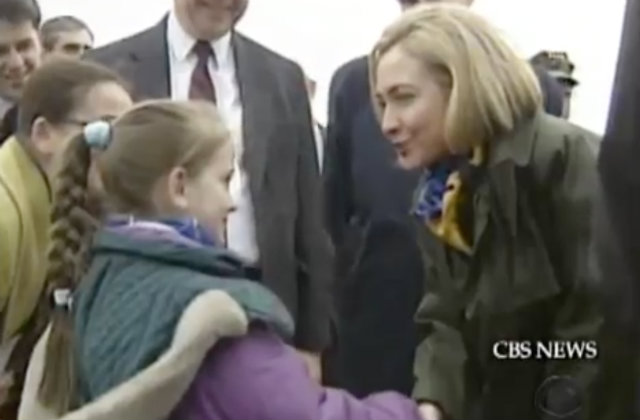 In light of Chelsea Clinton castigating Counselor to the President Kellyanne Conway on Twitter on Friday morning for bringing up a nonexistent terrorist attack in an interview, there have been two common rebuttals:

The latter came up a bit last year during the elder Clinton’s second bid for the presidency, as well. The definitive article on the subject comes from the Washington Post, which ran a detailed fact check in 2008 that it then reposted (the original version is stuck in an older version of their website) and updated last year. The controversy began with this quote from a speech at George Washington University:

I remember landing under sniper fire. There was supposed to be some kind of a greeting ceremony at the airport, but instead we just ran with our heads down to get into the vehicles to get to our base.

While that specific speech set off the fact-checking, CBS News reported at the time that she had been making the same basic claim for months on the campaign trail. What caused the story to blow up was actor/comedian Sinbad, who was on the trip as entertainment for the military (as was Sheryl Crow), contradicted Clinton’s story to WaPo. “I think the only ‘red-phone’ moment was: ‘Do we eat here or at the next place,” he said. “I never felt that I was in a dangerous position. I never felt being in a sense of peril, or ‘Oh, God, I hope I’m going to be OK when I get out of this helicopter or when I get out of his tank.'” Clinton dismissed his account by flatly saying that “”Sinbad is a comedian” and explaining the security measures that were taken.

WaPo couldn’t find any corroboration of sniper fire, though, and eventually Clinton said (in what was seemingly a half-joking tone) she inaccurately described the trip because she was sleep-deprived.

The 2016 update from WaPo did add a new piece of information that could possibly give credence to how Clinton could have, at least theoretically, misremembered exactly what happened. In former ambassador Christopher R. Hill’s book “Outpost,” he writes that on the flight to Bosnia, the passengers were warned of potential sniper fire, which he found ridiculous because they were heading to a U.S. military base that had been incident-free. “But the threat of snipers seemed to be all most people could remember,” he wrote.

As referenced above, though, “Outpost” came out years after the initial controversy. That isn’t to say he wasn’t telling the truth, but it has to be taken into consideration.