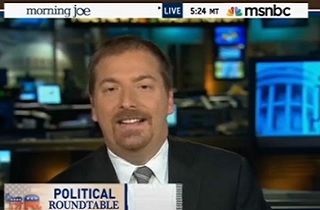 NBC News Political Director and Chief White House Correspondent Chuck Todd has taken a beating from both sides of the political spectrum this week, first for the crime of retweeting, then transparently and professionally retracting, a colleague’s reporting, and now, for allegedly disavowing the media’s role in fact-checking Republican falsehoods about Obamacare. In the latter case, is that really what he said during his Wednesday appearance on Morning Joe?

In both cases, Chuck Todd is the ripest of targets for media critics on both political poles. For conservatives, he’s a two-birds representative of the mainstream, objective press that they’re always trying to discredit as actually a stealth liberal cabal, and an avenue to attack the dreaded MSNBC. For liberals, Chuck is typical of the “Beltway Villager” class that reduces weighty policy matters to insular political considerations.

Chuck became the focal point of criticism over reporting, by colleague Richard Esposito, that falsely named the Washington Navy Yard shooter. He retweeted Esposito’s scoop, then assisted in retracting it, providing extensive detail. Esposito is wide open to the criticism that he should have applied a high bar to reporting information with so much potential for harm, but Chuck Todd’s role in this was minimal, and arguably more helpful than not. Nobody’s ever heard of Richard Esposito, though, so Chuck got to sit in the barrel.

On Wednesday morning’s Morning Joe, Todd attracted the attention of liberal critics when, as TPM puts it, he suggested that It’s Not Media’s Job To Correct GOP’s Obamacare Falsehoods. But is that a fair reading of what Chuck said? Not according to him. In response to the criticism, Chuck tweeted “Somebody decided to troll w/mislding headline: point I actually made was folks shouldn’t expect media to do job WH has FAILED to do re: ACA.”

Here’s a slightly longer version of the exchange in question, which begins with Todd challenging the Villager-approved talking point that the President is actually the one who’s threatening to blow up the government. He then talks extensively about the “million disasters” in the political process of health care reform, including some that liberals would quickly agree with.

The key exchange is between Todd and former Governor Ed Rendell (D-PA) in which Rendell talks about the misinformation that has proliferated on the Affordable Care Act. “I think the biggest problem with Obamacare, it’s not a perfect bill by any means, was the messaging,” Rendell says. “If you took ten people from different parts of the country who say they’re against the bill, and sat them down, I’d love to have ten minutes with them and say, ‘Tell me why you are against the bill.’ If they told you anything, it would be stuff that’s incorrect.”

“But more importantly, it would be stuff that Republicans have successfully messaged against it,” Todd says. “They don’t repeat the other stuff because they haven’t even heard the Democratic message. What I always love is people who say, ‘Well, it’s you folks’ fault in the media.’ No, it’s the President of the United States’ fault for not selling it.”

A fair reading of what Chuck said, without endorsing it, is that it’s not the media’s job to promote Democratic messaging. That’s not the same thing as saying they have no duty to correct falsehoods, which is an interpretation by extension. In context, he’s clearly talking about the political process around Obamacare, and not the substance of it.

What I find problematic about this exchange is the pivot that Todd uses to get to the politics. When Rendell says people are being misinformed, Chuck says “But more importantly, it would be stuff that Republicans have successfully messaged against it.”

Perhaps he meant more important in terms of the outcome, but it should matter more, to the news media, if the messaging, Democratic or Republican, is true. In fits and starts, the media has provided context for the policy, but almost always within the horse race frame of who is “winning” the messaging war. For example, news outlets often (but not always) point out that almost every part of the Affordable Care Act is wildly popular, except for the individual mandate. Everyone loves to eat dinner, but nobody likes to pay the check. Yet even with that knowledge, as demonstrated in the segment above, news personalities routinely refer to the law as “unpopular.” That’s a defensible bit of semantics, but an abdication of the duty to provide context, in the public’s interest.