Did James O’Keefe’s Project Veritas Actually Get a University to Sanction an ISIS Club? 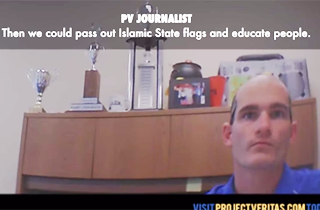 While many have skepticism about whether Project Veritas truly got a Cornell dean to approve an ISIS club on campus, their latest video appears to show officials at Barry University actually approving a club pitched as “Sympathetic Students in Support of the Islamic State of Iraq and Syria.”

Project Veritas, run by conservative provocateur James O’Keefe, sent a Barry University honors student to ask numerous school administrators about the possibility of starting a pro-ISIS club and, after meeting with three admins and a faculty sponsor, got her club up and running, after openly telling them that she planned to send flashlights, pencils, and night-vision goggles to the Islamic State.

“They are terrorists, but, like, we’re trying to help them,” an undercover “Laura” says in the video. “We’re trying to, like, educate them and give them funding so that they don’t have to be impoverished and get involved in acts of violence.”(Her explicit language, combined with the relative lack of sketchy splicing that’s a hallmark of a Project Veritas video, makes this video a lot more believable.)

As The Daily Mail summarizes, the video makes it look alarmingly easy to start an ISIS club:

The only objection Laura encountered was related to the group’s proposed name.

‘The only thing, as far as the name [goes],’ she heard from Frederique Frage, the university’s associate director of international and multicultural programs, is that ‘technically our country is at war with ISIS’.

Frage was quick to add: ‘I am not saying that – at all – ISIS represents Islam.’

But students might have ‘some reservation’ supporting a group engaged in a ‘humanitarian effort’ aimed at the terror group, she said. ‘It’s just unfortunate.’

Another multicultural program administrator, Daisy Santiago, chimed in that Laura should rename her group ‘Students in Support of the Middle East’ – ‘as opposed to having the ‘ISIS’ [name].’