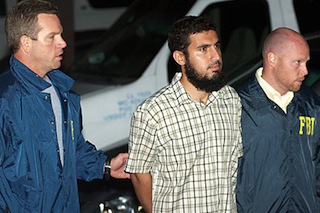 In the days since the public learned of PRISM, the NSA’s massive internet surveillance program, defenders have credited the system with foiling a 2009 terrorist plot. That claim is now falling under intense scrutiny from those who say the program was peripheral at best to the investigation.

Representative Mike Rogers said on Thursday that the program had helped stopped a major terror attack in recent years. Anonymous sources identified that victory to Reuters as the arrest of Najibullah Zazi, who had been plotting to attack the New York City subway station in 2009. The New York Times quoted an anonymous senior intelligence official who credited PRISM’s ability to read Zazi’s emails as instrumental to locating him.

But legal documents from Aziz’s arrest are casting doubts on these claims. A computer seized during an earlier raid gave British authorities and FBI agents access to an email account that Zazi later emailed for a bomb recipe, meaning PRISM’s comprehensive surveillance would have been unnecessary.

“Old-fashioned police work, not data mining, was the tool that led counterterrorism agents to arrest Zazi,” Ben Smith wrote at Buzzfeed, going on to say:

The details of terror investigations are not always laid out this clearly in public; but they appear to belie the notion, advanced by anonymous government officials Friday, that sweeping access to millions of email accounts played an important roil in foiling the subway attack. Instead, this is the sort investigation made possible by ordinary warrants under the Foreign Intelligence Surveillance Act; authorities appear simply to have been monitoring the Pakistani email account that had been linked to terrorists earlier that year.

Glenn Greenwald, the Guardian journalist who helped break the PRISM story this week, has been adamant that defenses of the program relie on unsubstantiated assessments of their role in stopping terrorism. In response to Smith’s story, Greenwald tweeted: