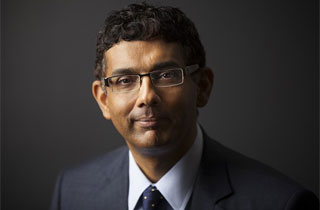 D’Souza posted two now-deleted tweets posing with Bannon and Gorka inside the White House holding his book, The Big Lie: Exposing the Nazi Roots of the American Left.

Dinesh D’Souza deleted a tweet claiming he briefed Bannon and Gorka on his new book linking Democrats to Nazis pic.twitter.com/0d3UgfXSbJ

D’Souza added that the controversial deletion “is all going to be cleared up.”

I just asked D’Souza about this at GWU, he says he deleted the tweet because it “had notes showing the inner workings of the White House” https://t.co/hYIXrTF6MI

This is not the first time the Trump administration has experienced a Bannon whiteboard leak via Twitter, as Rabbi Shmuley Boteach posted a photo in May showing Bannon’s to-do list.

In regards to the book itself, a promo piece — courtesy of Fox & Friends — explains D’Souza’s latest work “explodes the Left’s big lie” and “expertly exonerates President Trump and his supporters, then uncovers the Democratic Left’s long, cozy relationship with Nazism . . . and how today’s anti-free speech, anti-capitalist, anti-religious liberty, pro-violence Democratic Party is a frightening simulacrum of the Nazi Party.”

D’Souza’s controversial history includes a campaign-finance related felony in 2014, cheating on his wife while at a Christian conference, and joking about Senator John McCain’s time as a prisoner of war in Vietnam.