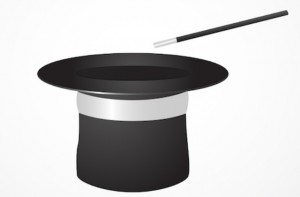 For a third day, the political news cycle is being dominated by talk of Donald Trump‘s repeated assertions that President Obama and Hillary Clinton are the co-founders of the terrorist group ISIS, an assertion he declined to walk back Thursday when given the opportunity by radio host Hugh Hewitt. Trump’s refusal to back off is getting a lot of play, but there are two important things that people are missing from that interview.

The first is that Trump agrees with Hewitt substantively, that his argument is the same as Hewitt’s, and that his only disagreement with Hewitt is over whether he should call Obama the “founder.” The second is Trump’s astonishing revelation of the sleight of hand he’s using to pull off a trick like this:

HH: And that’s, I’d just use different language to communicate it, but let me close with this, because I know I’m keeping you long, and Hope’s going to kill me.

Talk about it they have, and whatever you think about Trump’s chances in the general election, this was a major victory for the candidate on a number of levels. Most importantly, it completely shifted the conversation away from the incredibly damaging controversy over his assassination joke, which had implications far beyond its direct impact with voters.

But even on its own merits, what Trump accomplished was not just to get the news media to report on his comments, but to get them to regurgitate his own talking point as their own thoughts. Here’s Trump surrogate Ben Carson saying something that probably sounds awfully familiar today, except he said it a week ago:

By accusing Obama and Hillary of being the “founders” of ISIS, Trump has gotten the media to repeat that exact Ben Carson talking point over and over (64 times on MSNBC and CNN combined since Thursday morning) as the reasonable alternative to Trump’s assertion:

On Friday, though, even after Trump had given up the trick to the entire news media, they fell for it again. With some of the discussion turning toward Trump’s own 2007 comments that the US should “get out” of Iraq, and needing to cap off the week with a win, Trump tweeted that he was just being sarcastic when he called Obama the founder of ISIS. Like Imperial Stormtroopers looking for ‘droids, the media commenced a dutiful flurry of panel hits and surrogate interviews devoted to Trump’s “walkback,” all of which once again contained the talking point in question posed as the reasonable thing Trump should have said. Since he sent it, Trump’s tweet has been reported forty times on MSNBC and CNN.

It’s as if Tom Sawyer confessed to all of his friends how he manipulated them into painting his fence, then got them to do it again that same afternoon. Fool me once, shame on you. Explain how you’re fooling me and then continue to fool me, can’t get fooled again. Man, I almost miss that guy.