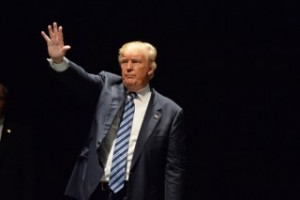 If expectations for presumptive Republican presidential nominee Donald Trump get any lower, he may wind up running with an amoeba on his presidential ticket. In a radio interview Thursday morning, the real estate mogul demonstrated that in addition to his overt racism and advocacy for war crimes, he lacks even the ability to count to five, or two digits higher than the failure that doomed Rick Perry. Trump was discussing the recent Supreme Court decision striking down Texas’ anti-abortion TRAP laws when he made a stunning claim:

Trump: Now if we had Scalia was living or is Scalia was replaced by me, you wouldn’t have had that. Okay? It would have been the opposite.

Gallagher: So just to confirm, under a Donald — a President Donald Trump-appointed Supreme Court, you wouldn’t see a majority ruling like the one we had with the Texas abortion law this week.

Trump: No, you wouldn’t see that. And people understand that.

Well, not people with five fingers on each hand. The case Trump is referring to, Whole Woman’s Health v. Hellerstedt, was decided by a 5-3 margin, which means that even with another conservative justice on the court, the result would have been 5-4 against the Texas laws. Trump’s gaffe does underscore, however, the steep obstacle that this case represents to the anti-abortion right. The battle over President Obama’s nominee to succeed Scalia has been contentious enough. Flipping two seats on the Supreme Court with justices willing to undercut Roe v. Wade is a tall order, even for a candidate who can count.