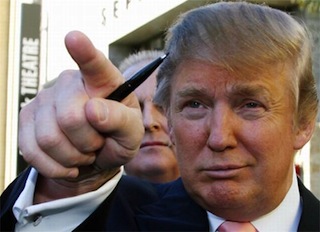 Sigh. I don’t want to type this. My fingers are rebelling against me. This is like the blogging equivalent of visiting your high school years after you graduate. I remember how things used to be, but it just feels wrong to be here now. How is it May of 2011 and I’m still typing articles about Donald Trump and President Obama’s birth certificate? Can’t he spend his time on something important like finally looking into those fishy “the earth is round” claims? (UPDATE: Good news! The report is false. See bottom of post for more)

So who is still clinging to this tired story with the desperation of a VHS salesman? Well, it’s WorldNetDaily’s Jerome Corsi who apparently had a phone conversation with the reality show judge in which Trump finally, finally spoke out about the long form certificate released by the president. Thank God. I totally needed more of Trump’s thoughts on this. That giant press conference was insufficient.

“Trump said his period of almost-complete silence on the issue following the release by the White House on April 27 of the image of a ‘Certificate of Live Birth’ from the state of Hawaii was not because he was satisfied with the document.

‘I always said I wanted to know if it was real,’ Trump told Corsi.

During their conversation, Trump told Corsi his own computer expert told him at the release that it was a computer-generated document.”

Of course, we haven’t heard these doubts come out of Trump’s mouth himself. All we’ve heard is Corsi describing a phone conversation he supposedly had which is kind of odd. Since when is Donald Trump shy about revealing his opinions…?

Whoa, whoa, whoa. Where am I going with that line of thought? I sound almost as paranoid as…as…I don’t know. Some group of conspiracy theorists. I can’t think of a good example. Any way, why would Corsi have any reason to promote this story way past its sell-by date?

“[Trump’s] comments came yesterday in a telephone call to WND senior reporter Jerome Corsi, Ph.D., who is appearing on wall-to-wall radio programs – between 10 and 20 per day – to respond to questions about his latest best-seller, ‘Where’s the Birth Certificate? The Case That Barack Obama is Not Eligible to be President.’“

Oh, come on, giant block quote! That doesn’t prove anything. I don’t know Corsi personally but the guy’s a reporter. A senior reporter. With a doctorate!

Besides, the idea that a person would blatantly try to use the Birther story to string along the media and promote themselves? That’s just ridiculous.

UPDATE: Well, it looks like I should have gone with my gut and been more suspicious of the lack of direct quotes in the WND post. Trump sent us a response that is printed in full below:

“I am proud of the fact that I was able to get President Obama to release his birth certificate. President Clinton couldn’t do it, Senator Mc Cain couldn’t do it—no one else could do it! Frankly, many people were surprised that it took so long for this to happen. Is his birth certificate legitimate? I hope it is for the good of the country, but that’s for experts to determine—not me. I have not read the book written by Jerry Corsi nor did we discuss whether or not the birth certificate was computer generated or in any way fabricated. I merely asked him how his book was doing and wished him good luck.”