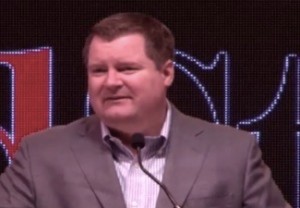 Just when you thought Donald Trump‘s presidential run couldn’t get any more absurd, the real estate mogul embroils himself in a feud with Fox News’ Megyn Kelly, and consequently turned the most influential voice of the online right into a humorless college student looking for a safe space. Redstate chief Erick Erickson has banned Donald Trump from the Redstate gathering over his offensive comments, an irony so rich, you could frost a gay wedding cake with it.

In response to Trump’s off-the-cuff comment about Kelly’s metaphorical bleeding orifices, Erickson took to the stage Saturday morning, and explained his decision to ban Trump:

It would be a simple matter to ask whether Erickson wants his daughter to hear someone call a blonde legislator “Abortion Barbie,” or call a female White House official a Nazi, or call people “whores,” or recommend banning his wife and daughter from a golf club, or tell Texas women to go get some coat-hangers, or call a Supreme Court justice a “goat fucking child molester” (I believe “goat-fucking” should be hyphenated), or any of the other gross things Erickson says, but I’m not going to do that. Well, I’m not just going to do that.

Erickson is the face of a conservative movement that never shuts up about how the politically-correct word police uses outrage over terminology to silence opposition and insulate themselves from uncomfortable opinions. And yet, he has just silenced Donald Trump so that he can create a safe space for his followers. That is hilarious on its own, but consider that even after Donald Trump called Mexicans “rapists,” questioned John McCain’s heroism, and after Trump fans started peppering him with racist insults, Erickson was still ready to vote for Trump. And of course, Trump was still welcome at Erickson’s Redstate gathering after he said all those horrible things that Kelly asked him about Thursday night.

In fact, Megyn Kelly wasn’t even outraged about the misogyny in those comments, if her question is any indication. She didn’t ask Trump about his misogyny or sexism, she asked about his “temperament” and ability to fire up the PC Hillary crowd:

“Your Twitter account has several disparaging comments about women’s looks. You once told a contestant on Celebrity Apprentice it would be a pretty picture to see her on her knees. Does that sound to you like the temperament of a man we should elect as president, and how will you answer the charge from Hillary Clinton, who was likely to be the Democratic nominee, that you are part of the war on women?”

Trump’s sexism and misogyny were not a bug with Republicans on Thursday night, and they really aren’t now. If Trump had, instead, said “That Hillary Clinton is always on the rag, amirite?” he’d be polling at 60% and guest-editing Redstate. This is all a function of Erickson and his ilk finally realizing what I’ve known all along: Trump can win.

The crowning irony in all of this is that Trump isn’t even guilty of what he’s been accused of. While the subtext of his remarks that’s being read into is obvious and in keeping with his past statements, it was clearly unintentional, as he has been explaining. When he said that there was “blood coming out of her eyes, blood coming out of her… wherever,” Trump was obviously tripping over the metaphor, and couldn’t choose between ears, nose, or mouth, so he “blah peopled” it.

That’s not to say that Trump doesn’t deserve the revulsion the comment is causing, but he deserved it on day one of his campaign, not now. Only time will tell, but it’s doubtful that this will be The Thing That Finally Sinks Donald Trump, because this is exactly the thing that made Donald Trump. Erick Erickson, with his own history of outrageous misogyny and anti-PC rhetoric, is a big part of the conservative movement that created a safe space for Donald Trump.