Donna Brazile on CNN Controversy: ‘I Was in Touch with Everybody’
audio

Donna Brazile on CNN Controversy: ‘I Was in Touch with Everybody’ 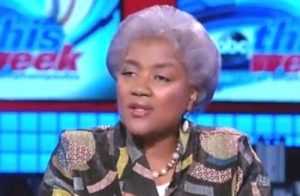 SiriusXM host Joe Madison spoke with DNC interim chair Donna Brazile this morning and touched on the controversy surrounding her when she was still at CNN.

To recap, the WikiLeaks emails revealed that Brazile sent along at least two questions to Team Clinton ahead of a town hall and debate, and CNN formally severed ties to her in the fallout from this.

Madison broached the topic by saying to Brazile that cable networks need to understand, “when you hire folk, that, as you say, their responsibility is to their candidate and their party, they’re going to do whatever they can to win, that’s the nature of the beast.”

Brazile said that her conscience is clear and insisted that she has been “in touch with everybody,” including Martin O’Malley and Bernie Sanders. (She did not say whether those camps received any questions ahead of time.)

And then she said this:

“You’re doggone right I’m gonna talk to everybody. Joe, I will never go out on TV or come on radio without the facts. I will ask, I will submit things, I will circulate things, and guess what, I also enjoy the exchange that I have with my colleagues. They work for everybody. My friends are deeply embedded in all of the campaigns.

She also said that she talks to Republicans and lamented the culture of “selective outrage.”

RELATED: ‘You’re Like a Thief’: Brazile Snaps at Megyn Kelly When Asked About WikiLeaks

Brazile concluded by invoking Russia and saying people are “sending around these emails like they’re gossip and not understanding the impact that a foreign country is trying to undermine our democracy by stealing the playbook of one political party.”