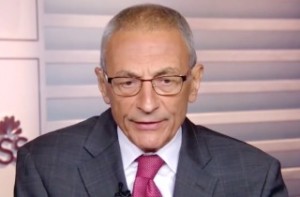 At some point today, you may have noticed the hashtag #SpiritCooking trending on Twitter. In fact, at the time of publication, it is the #2 trending item. So, what’s this all about?

Immediately, it became a think on the right, getting a boost by conservative hosts Laura Ingraham and Sean Hannity.

Well, it appears that this is all about Podesta and his brother Tony being invited to attend a dinner with well-known performance artist Marina Abramovic in 2015.

I am so looking forward to the Spirit Cooking dinner at my place. Do you think you will be able to let me know if your brother is joining?

All my love, Marina

According to Huffington Post, one of Abramovic’s ‘Spirit Cooking’ dinners in the late 90s involved some kinda weird artsy stuff.

A little history: Abramovic did, in 1996, create a series of 12 etchings called “Spirit Cooking,” which contained Yoko Ono-esque “recipes” like “sitting on a copper chair / comb your hair / with a clear quartz crystal brush / until your memory is released.” Spin also uncovered a YouTube video called “Spirit Cooking,” in which Abramovic paints paranormal messages in pig’s blood on the wall, including, “Mix fresh breast milk with fresh sperm milk / Drink on earthquake nights.”

However, according to the artist, the 2015 dinner was just a run of the mill dinner with friends.

“It just a normal dinner,” Abramovic said. “It was actually just a normal menu, which I call spirit cooking. There was no blood, no anything else. We just call things funny names, that’s all.”

The event was held as a reward for donors to a Kickstarter campaign raising money for the Marina Abramovic Institute, a performance and education center. Tony Podesta was one of ten donors to attend the dinner. John, whom Abramovic has never met, was not present.

However, despite all of this, many of the more well-known figures on the Alt-Right have used this news to paint the Clinton campaign as Satan worshippers.

It all makes sense now. The whole family is involved in this satanic cult. pic.twitter.com/KVV7FbOV6w

At this point, voting for Hillary Clinton is clearly a vote for Satan! #SpiritCooking

I am now accepting apologies from everyone who said I was crazy for writing books about how the Establishment are Satanists. #SpiritCooking

I haven't been calling her Hillary Satan for nothing. #SpiritCooking

Meanwhile, in an unrelated but equally insane event, a San Diego church has warned its parishioners that the devil works through Hillary Clinton, a bit of politicking that could put its tax exempt status at risk.