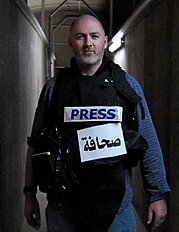 How do you handle the news that a decorated international correspondent who put his life on the line for his job narrowly escaped captivity and death? If you’re Matt Drudge, you turn it into a totally misleading New York Times smear!

Stephen Farrell, the New York Times reporter in question, was held hostage in Afghanistan for days, during which the Times successfully managed to keep his captivity under wraps. Farrell’s translator and a British soldier were both killed in the ensuing raid to free him. Drudge devoted the three coveted red links in the top-right corner of his page to the story. This is what they said:

Here’s the thing: if you read the articles, almost all of that “anger” and those “questions” were actually being directed towards the British military, not Farrell. According to the Times Online article (that’s UK Times, not NYT), “Hostage negotiators expressed shock and anger at Gordon Brown’s decision to approve a commando raid to free a kidnapped British journalist, saying that they were within days of securing his release through peaceful means.”

Farrell was criticized for knowingly going into a dangerous area. But there was only one quote that actually questioned the goal of saving his life, from an anonymous British military source: “When you look at the number of warnings this person had it makes you really wonder whether he was worth rescuing, whether it was worth the cost of a soldier’s life.”

That quote came from the Telegraph, from whence it was picked up by Breitbart, from whence Drudge picked it up and tried to make the whole complicated mess of military, journalistic, and political ramifications all about how Times reporters=bad, and maybe not even worth saving. News aggregation at its finest.