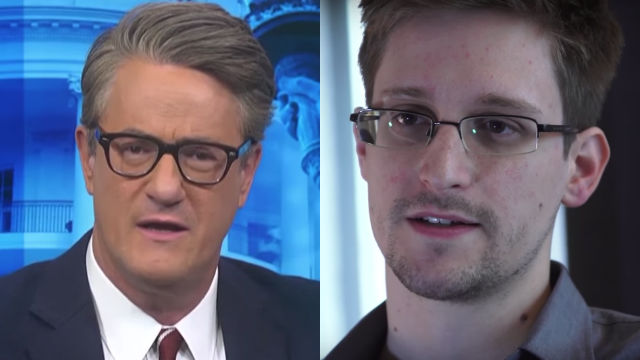 Remember Edward Snowden? Well, today he responded on Twitter to comments made by Joe Scarborough.

Let’s back up a second. Scarborough tweeted this morning his criticism of a National Review editorial on the Nunes memo, bemoaning how they’re “trying to explain away Trump and Nunes’ war on the Justice Department and FBI”:

A disappointing @NRO editorial trying to explain away Trump and Nunes’ war on the Justice Department and FBI. It even applauds exposing the FISA process for a partisan memo that only hurts Trump’s cause. What a long way from the #NeverTrump cover. https://t.co/5tlWLsh8P1

This is a mischaracterization of what they wrote. The key paragraph says all the information should be released so the public knows what happened. https://t.co/LtXmqOsRti pic.twitter.com/ySiHnxcAxb

“All the information should be released….”

And then Snowden himself responded with a “Dear Joe” tweet:

Dear Joe,
With respect, that "reckless" approach led to the largest reform of unconstitutional domestic surveillance since 1978, and the 2014 Pulitzer Prize for Public Service journalism. If that's what recklessness looks like, we could use a hell of a lot more of it. https://t.co/QliTqo7o3h