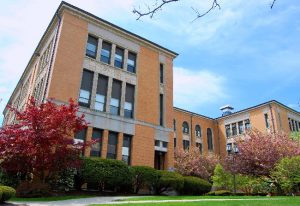 Last week, Salem State University decided to shutter a political art exhibit over complaints from a number of students. The students, many of them minorities, felt some of the paintings were offensive due to displaying images of the Ku Klux Klan and Jews being round up in Warsaw.

And, without any context whatsoever, it may seem fair that people would react to anger to this kind of imagery, especially around a divisive election in which the KKK and anti-Semitism were invoked quite a bit. But therein lies the rub — context.

See, the artist behind the offending art, Garry D. Harley, was asked by the university to create works of art inspired by the election. Harley, who is definitely not a Donald Trump supporter, decided to go right after the rhetoric of Trump’s campaign by utilizing images of hate and bigotry to hammer his point across.

According to In Higher Ed, who wrote about the uproar at the school over the exhibit, Harley’s message was obviously lost, despite the fact that he was merely trying to portray hate and not promote it.

After students began complaining about the paintings in the exhibit, titled ‘State of the Union,’ a forum was held by the school to discuss the meaning of the art. Harley attended and brought photos of other famous pieces of art that showed horrific scenes as a means of drawing attention to the evils mankind can impose. However, it appears the students weren’t willing to listen.

He brought and shared images of such paintings as “The Third of May 1808,” by Francisco Goya (at left), and “Guernica,” by Pablo Picasso (at right). Harley said he wasn’t trying to compare his artistic talent to those legendary painters, but to show the students the long tradition of painting what one opposes, and what one is horrified by. Goya portrayed French soldiers killing members of a Spanish uprising against Napoleon’s forces. Picasso depicted the way Spanish fascists — along with their German and Italian allies — destroyed a town.

Harley explained that he viewed his art as warning about the dangers of Trump’s rhetoric and that he viewed art as a tool with which to spread alarm. But he said that “the anger of the students sort of overwhelmed” what he was trying to say.

At one point, Harley said that, with mixed feelings, he offered to remove the Klan image if that would allow the exhibit to otherwise remain open, but he said that students rejected that idea, as there were other artworks that bothered them.

Instead, the school acceded to the group of students’ demands. In a statement released to faculty, students and staff, Salem State said they would like to apologize to those “who have experienced distress resulting from this exhibit.” Despite the fact that Harley was willing to pull the artwork that caused the most anger, the school announced it would temporarily suspend the exhibit and would then hold meetings with students to discuss further concerns.

Additionally, the statement also revealed that the school felt it was in the wrong for not providing context in close enough proximity to the artwork, even though it was noted that there was a guest book on location that provided all relevant information. After the complaints came in, the artists’ intentions were printed alongside the art, glass doors were covered and warnings were posted, all to no avail.

The statement ended with this paragraph:

Art is often intended to spark discussion about societal ills. In this case, it did just that, but we deeply regret the distress it has caused students. We thank the students for sharing their views, and we look forward to working with them to determine how to move forward.

One can make the case of this being political correctness, ‘safe spaces,’ trigger warnings and outrage culture all gone awry. But, in my opinion, it is speaks to something else. This shows a feckless administration that doesn’t realize it is the one who needs to put its foot down, especially when it comes to matters of education and learning.

Students are students for a reason — they are learners. They aren’t teachers and, thus, shouldn’t be the ones making demands, especially when it comes to matters of wide-ranging understanding in the areas of art, politics and social commentary. The faculty should take the reins here and inform the students that while they may find something initially offensive due to their own (limited) life experiences, they need to delve further into the subject matter to see if their initial objections are valid.

And, even if upon further reflection, they still find these certain subjects objectionable and distasteful, conversation and discussion with their teachers and mentors should then be explored. You know, the whole reason for being in college in the first place!

When you let students in their teens and early 20s set the pace when it comes to the education they receive, you’re going to be left with an educational environment that is extremely insular. It is the things that offend us, that push our buttons, that perhaps even repulse us that helps make us think about the world at large. It promotes intellectual curiosity. And it readies us for what life will throw at us.