Enough Of The ‘Woe Is Me’ Black Conservatism: It’s Not About Color, It’s About Ideas 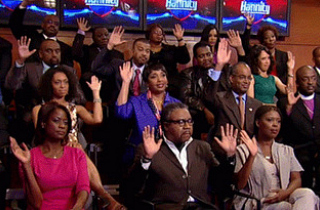 “You gotta be willing to take the hits, and not pointing fingers saying you ain’t where you wanna be because of him, or her, or anybody. Cowards do that and that ain’t you. You’re better than that!” – Sylvester Stallone, Rocky Balboa

Over the last few weeks, this powerful moment from the last installment of the epic Rocky series popped into my mind while a prevalent rallying cry on the right grew louder — that being both African American and conservative invites discrimination, censorship, and general nastiness from the left. The volume of this complaint has exploded as neurosurgeon and newfound conservative folk hero Ben Carson was initiated into the Republican rock star hall of fame after turning the national prayer breakfast with President Obama into his own speech against Obamacare and becoming the subject of further ridicule when he compared gay marriage to bestiality on Hannity.

Conservative media predictably fell in love, as Carson has enjoyed a media blitz with friendly outlets, commiserating over the meme that black conservatives are vilified and demonized as the left tries to silence them. Mediaite’s own A.J. Delgado wrote a rather compelling column agreeing with Sean Hannity, who was up in arms that black conservatives “have no freedom of speech.” Hannity even held one of his extensive town hall specials with over two dozen African American conservatives, sharing their experiences of being “attacked” for being a black and conservative in America.

One of the participants of that town hall, my friend and radio host David Webb, spoke to me about this predominant feeling of discrimination and suppression a black conservative lives with:

What the left is selling you is that if you’re black, you’re liberal, and if you’re not liberal, there is something wrong with you.

I’d like to respectfully disagree with David and my other friends in right-wing circles (I previously worked at Fox News for two-and-a-half years, so I have a few), and to take on a larger-scale complex that has permeated through conservatism for over 30 years: that the deck is automatically stacked against people who believe in the party of Lincoln, whether you’re white, black, male, or female.

From cries against the evil “liberal media,” to big bad Hollywood funding “radical leftist” candidates, to entire outlets built on decrying the daily “double standards” conservatives face — to be a conservative has become claiming victimhood.

But underneath this conservative victimization complex, which I believe is genuinely and strongly felt, is a simple truth—it is the values and priorities behind your political ideas that garner scorn from the left (and a growing number of independents), not the fact that you happen to think for yourself or have a different point of view.

When a prominent doctor goes on national television comparing two men or two women’s right to get married with coercive sexual activity between a human and an animal, should liberals respond “You know that Carson might have a point”? Going beyond the absurdity and offensiveness of Carson’s statement (not just to liberals), is it totally off-the-rails of this author to point out the inherent contradiction of conservatives like Carson, who favor the government’s right to set federal policy prohibiting consensual activity like gay marriage but in the same breath rail against the “socialist government takeover” of our healthcare system?

And if this same conservative neurosurgeon proposes tossing out that healthcare system in favor of a free market based health savings account you contribute pre-tax money to from birth, the outcry against him from liberals has nothing to with his skin color or ideology. It is because his proposal leans back on the conservative obsession with the free market, the same market that tells people with pre-existing conditions you’re out of luck, and caters to a system driven by insurance companies rather than the needs of citizens.

Am I discriminating against Dr. Carson, and his right as an American to say and think what he wants, when I ask him what I would do if I was hit with a health crisis like cancer, but didn’t have enough money in my health savings account to pay for hospital bills piling into the hundreds of thousands of dollars? Is it media bias against a conservative when I ask just how I am supposed to put aside enough pre-tax contributions throughout my life when my parents don’t have the extra funds to set aside during my childhood (while they are saving for out of control college costs and putting food on the table for my two brothers and I), or as an adult, I don’t have the discretionary funds to set aside in the midst of an economy where prices are going up, but wages are staying still?

When a charismatic (and entertaining) presidential candidate, successful pizza chain owner named Herman Cain, overtakes Bush/Cheney in tax policy regressiveness by proposing the mathematical mess that was 9-9-9, should the unemployed and low income earning liberals he would crush storm Zuccotti Park celebrating their next economic savior, waving signs “Cain and Able“?

Is it liberal bias when I point out to conservative media that their “evil liberal media double standard” was conspicuously absent when an entire press backed President Bush during his road up to Iraq, saying next-to-nothing critical for years after 9/11 happened, and yet only now do these same conservatives criticize President Obama for his secretive drone program while saying pin-drops about Bush/Cheney torture in the early parts of the war?

If conservatives spent as much time evaluating their policies, outreach, and message as they do decrying the bias, double standards, and oppression they feel being dealt by the left, they might be able to offer the country a healthy alternative to liberalism. That won’t happen until all conservatives, white or black, end the faux-outrage and realize a major truth: Most journalists and Hollywood stars being liberal didn’t cause the GOP to lose five out of the last six presidential elections in the popular vote. As this past election cycle proved, a minority of powerful individuals and checkbooks cannot buy an election.

You are losing the war of ideas, and as the great Rocky Balboa showed: It isn’t about pointing fingers or making excuses. It’s about fighting the good fight, and win or lose, continually getting up after you get knocked down. Liberal or conservative, all voters respect a party based on ideas that better society, flexibility and willingness to compromise, and ability to reflect when they have steered off course.

If conservatives start listening to more Rocky, and less Rush Limbaugh, they might even be able to win back the White House sooner than most think. And it might be more effective improving things like health care from inside the Oval Office…

Rather than attacking it from a prayer breakfast podium or special Hannity panel.