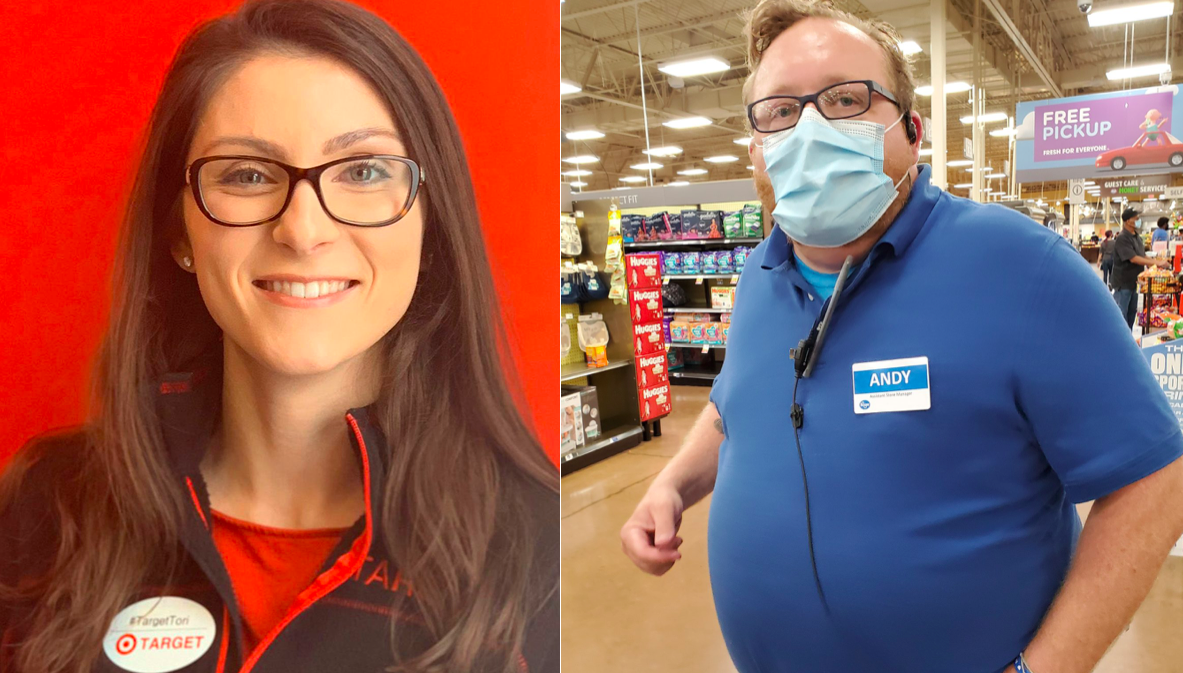 People can be absolute jerks, especially on social media, but one retail employee with past experience triumphing over online harassment is now using her powers for good to help out a fellow essential worker.

Tori Perrotti, a manager at a Target store in Swansea, Massachusetts (about 47 miles south of Boston) understands how tough it can be when an irate customer isn’t just unhappy, but attempts to shame you on social media. When a manager named Andy at a Kroger grocery store in Louisville was attacked on Twitter by a customer annoyed he didn’t enforce a face mask policy as aggressively as she wanted, Perrotti knew just what to do.

Back in January (gosh, that feels like a million years ago, doesn’t it?) Perrotti herself was the target (pun intended) of a similar attempt to shame her online. David Leavitt, whose Twitter bio identifies him as an “Award-Winning Multimedia Journalist,” saw a $89.99 Oral B Pro 5000 electric toothbrush next to a display sign that said $0.01, and demanded that he be allowed to purchase the toothbrush for a penny.

Perrotti refused, Leavitt tweeted her photo and claimed she was violating Massachusetts law and he had called the police. Twitter rose up in fury — but against Leavitt, not Perrotti, finding his story ridiculous and showing sympathy for her. #TargetTori began trending, and a GoFundMe set up to send her on a vacation quickly racked up thousands of dollars. In the end, Perrotti received over $34,000, had a lovely time in Hawaii, and launched her own Twitter account and social media campaign, urging her followers to “Pause, Be Kind.”

Saturday, Perrotti put her social network to good use, coming to Andy’s defense after Danielle Muscato posted several tweets criticizing Andy, claiming she had been “threatened [with] assault” when she asked another customer to wear a mask and she refused. According to Muscato’s tweets, she reported the maskless customer to Andy, who talked to the customer but failed to force her to wear a mask as Muscato wished. Muscato demanded the store’s security footage, and Andy reportedly refused that request as well.

I was just threatened w/assault at @kroger in Louisville because I asked another customer to wear a mask, and she refused.

I reported it to a manager, who found her and talked to her, but refused to do anything more.

His name is Andy, and he does not want Twitter to know that. pic.twitter.com/pATepOuSeJ

I didn’t get a pic of the woman who threatened me. But it’s all on camera, @Kroger has footage. I asked the manager about that footage, too, and he blew me off.

Kroger, this is unacceptable.

Muscato snapped Andy’s photo, posted her complaints on Twitter — and found herself stepping very neatly into the same shoes as the attempted penny toothbrush buyer Leavitt. The general online consensus was already leaning in Andy’s favor when Perrotti jumped in, tweeting an empathetic message of encouragement for him, and urging people to “stop using social media as a tool to shame people at their place of work.”

Dear Andy, I didn’t want the twitter world to know my name either. Turns out it isn’t half bad. If you need someone to talk to… I’m here for you. (Can we stop using social media as a tool to shame people at their place of work?) https://t.co/Pg3HvtkJxg

A few hours later, Perrotti tweeted that she was paying forward the same kindness Twitter users had given her earlier this year, with a GoFundMe to “Send #krogerandy on a vaca.”

No big deal but WE RAISED OVER $5000 IN 90 MINUTES! Speaking from experience I can say we definitely made up for any embarrassment in just our support alone…but a sweet vaca will make it even better. Working on finding #KrogerAndy #Kroger #andy #targettori pic.twitter.com/G0e0E4o7nl

“Andy is a manager at Kroger,” wrote Perrotti. “Like myself, he has been publicly shamed at his work. The gofundme that I received after my ordeal changed my life and afforded me an epic (and needed) vaca. Let’s do the same for Andy!”

Both #KrogerAndy and “Danielle” (Muscato’s first name) have been trending on Twitter for most of the day Saturday — although the tweets directed at Muscato are far less friendly.

And the GoFundMe page had raised over $14,000 in barely three hours, with several hundred people donating.

Enjoy that vacation, Andy (when we can travel again, anyway). For everyone else, let’s try to be nice to each other, ok? Or as Target Tori would say, “pause, and be kind.”

UPDATE: Perrotti posted another tweet saying that she believed she had made contact with “THE Andy from Kroger,” and she was going to verify his identity with a video chat tomorrow, and “pending it is truly him,” Andy would then be given control of the GoFundMe account. As of 10:30 pm ET, nearly $16,000 had been raised.

I believe that I have made contact with THE Andy from Kroger. We are going to have an official video chat tomorrow and pending it is truly him, Andy will be given control of the account. ? #KrogerAndy #Kroger #Andy #TargetTori #pausebekind