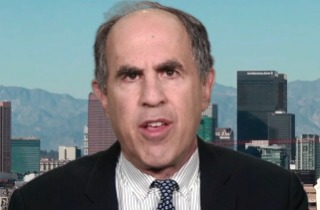 Mickey Kaus left The Daily Caller after editor-in-chief Tucker Carlson pulled his column critical of Fox News. Carlson, of course, also works for Fox News, and told Kaus, “We can’t trash Fox on the site. I work there.”

Kaus spoke out on the matter last week and said that on the right, “Everybody is scared of Fox.” CNN’s Brian Stelter invited him on Reliable Sources today to further elaborate.

Kaus said Carlson can do what he wants, but “at some point it stops being journalism” when they only write positive things about Fox and pull anything remotely negative. He told Stelter his major problem is whether Fox will “betray the right” on immigration reform by essentially staying silent about it.

RELATED: Chris Hayes: Fox Became ‘Most Trusted’ by Attacking Rest of the Media

As for conservatives being “scared of Fox,” Kaus explained that on the right, Fox is a great way to get your name out there and become a lot more successful in the conservative media sphere. So, in essence, people are reluctant to be critical of Fox.

To be fair, Ann Coulter leveled the same criticisms at Fox that Kaus did, and she did it on Fox.

Kaus also said he’s not sure if Daily Caller reporters knew about the Fox policy, but the Caller’s own Betsy Rothstein tweeted an immediate rebuttal to the segment (as well as taking shots at Stelter for saying he’s critical of CNN):

Fine @brianstelter do what you say: investigate your boss Jeff Zucker in a seriously critical way. Then I'll eat my words.