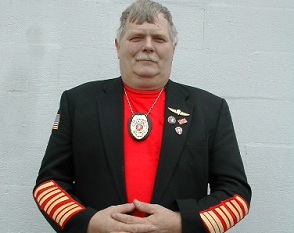 By now, millions of Americans have been introduced to Tennessee gubernatorial candidate Basil Marceaux, mostly through his train wreck viral video pitch. Stephen Colbert also spread the word, picking up where Wonkette left off in deconstructing Marceaux’s impenetrable website.

It didn’t surprise me, then, when the first thing Basil said to me when I called him for an interview was “You’re not gonna make an ass of me, now, are you?”

The answer is no. In a microscopic news cycle, there’s always more than meets the eye, and that’s what I was hoping to discover.

The good news is that Basil is both sincere, and in on the joke to some degree. In our interview, he talked about why he didn’t get to put his best foot forward in his television debut, and he has adopted the accidental nickname “BasilMarceaux.com” on his official YouTube channel, and on Official Marceaux 2010 merchandise.

On the other hand, he doesn’t want to strictly be the butt of jokes. After speaking with him at length, I can say he’s definitely a character, the sort of which gives our country its character. A former marine, he has interpreted the several iterations of the Freedmen’s Bureau Act to mean that every US Marine is also a federal judge for life, and that DUI checkpoints constitute slavery. We all have our Captain Ahab-esque obsessions, and Basil has chased this whale through the courts for years. He told me he was even banned from entering a federal building for 3 years, which was used as justification to expel him from the Pachyderm Club.

If Basil has an overarching theme to his campaign, it is that most American ideal of correcting injustices. One of his campaign promises is to “give everyone dental,” because poor people like him can’t afford to have their teeth taken care of. This has left him with only 3 teeth, which partially explains his unusual manner of speech. Contrary to what Colbert and others have said, Basil not only wasn’t drunk during his TV debut, he doesn’t even drink.

He also told me that he attended Penn State, but then transferred to a non-accredited school that basically swindled him out of his Veteran’s Administration loan money.

While it has been established that Basil Marceaux is not one of our great communicators, he seems to deserve his metamorphosis from cruelly-mocked laughingstock to shrewdly-marketed, adorable eccentric.

In Part 1 of our interview, Basil talks about the effects of internet superstardom, and details his novel approach to gun control and capital punishment.

In part 2 of our interview, Basil explains why his viral video debut was such a hot, amusing mess, plus some of his views on health care and education.

Basil and I spoke for almost half an hour, but I cut it down to this length for a few reasons. There was a lot of repetition, as it was sometimes hard to understand what he was saying through my state-of-the-art speakerphone setup. Also, as I said earlier, Marceaux’s interest in the injustice of traffic stops knows no bounds. The entire second half of our talk was devoted to it. I’ve summarized it here, and most of what he said is available on his website.