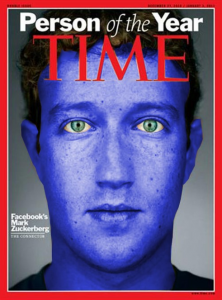 Last night just before 12 a.m., Twitter began exploding with the news: Facebook had raised $500 million — from Goldman Sachs. Bolstered by a $50-million stake from Russia’s Digital Sky Technologies, a previous FB investor, the Wall Street behemoth had slapped down $450 million to snag the Internet behemoth — now valued at a cool $50 billion. As if on cue, the internet noted that yes, that was cooler than a million dollars.

Notes the NYT’s Dealbook, which broke the scoop: this makes Facebook “worth more than companies like eBay, Yahoo and Time Warner.” It also doubles Mark Zuckerberg‘s multi-billion-dollar worth. It also makes Goldman Sachs the gatekeeper to who now gets to invest in the super-hot Facebook, and to the inevitable Facebook IPO. According to Dealbook’s Andrew Ross Sorkin and Evelyn Rusli, Goldman is “planning to create a ‘special purpose vehicle’ to allow its high-net worth clients to invest in Facebook, which would allow for max investment while circumventing disclosure rules for companies with 500 or more investors. Clever, that.

So: This is a big deal. Everyone’s already saying that this is putting Google even more on the ropes (seeing as now Facebook is the most visited website in the land) and that Goldman couldn’t be sitting prettier. Here are a few other things it means:

(1) Facebook hiring spree! To paraphrase Antoine Dodson, hide your startups, hide your engineers — Facebook’s a-comin’. Snapping up Hot Potato and Drop.io? Poaching Foursquare’s Nathan Folkman? That’s nothing compared to what Facebook’s got coming. Rumor has it they’re about to close on purchasing the Sun Microsystems campus in Menlo Park from Oracle. That’s probably not just for the scenery. They want to stock up, preferably with talent – and, importantly, companies – that will help it integrate across every platform possible. (I’m guessing one of the new buzzy photo apps will be snapped up.) If you think people are complaining about a developer shortage now, just wait.

(2) China! Mark Zuckerberg recently returned from a trip to China. Innocent pleasure jaunt for the Mandarin-speaking Facebook founder or connection-making relationship-building fact-finding mission to the land of 450 million potential users? China is certainly not an easy place to do business — they just kicked out Skype — but in a globalized, connected world, it’s certainly tough to ignore. Approximately 33% of its massive population is online and as we all know from the rest of the world, that is growing. It’s an insane market to ignore and smart, Mandarin-speaking audacious visionary CEOs probably aren’t going to shy away from trying. Facebook China. It’s gonna happen.

(3) Goldman’s PR Whitewash The Vampire Squid just attached itself to the buzziest, growing-est, Oscar-nominated-est, Person Of The Year-iest tech company around. Who will remember their year of scandal and record bonuses and how everyone hated Goldman Sachs (sample Gawker headline: “Who do you hate more, BP or Goldman Sachs?“). Goldman’s not there for you to like them, people, they’re there to make money — lots of it. But they did have a bruising year and being attached to the shining future-makers at Facebook (never mind the gatekeeper to the Facebook IPO) will certainly help. This lets them offer something shiny to their clients, and bask in that reflected glow. (And guaranteed cashola.) That doesn’t fool the people who know — I like Howard Lindzon‘s take:

For Goldman Sachs, this is a no lose situation. If it works, they get the IPO and make some money. That is their job. They got off so easy with the government that this is like Vegas money they probably thought would be the taxpayer’s at some point a year back…The only thing I DO know is that Goldman could give a rat’s ass about the social web and sharing. If they are the top in social web, it’s small potatoes. The war in bonds, currencies and commodities is where the real money is at. This is play money. I hate that Facebook is letting them in.

This is not a coup for Goldman Sachs, this is a shame for the social web.

Okay I lied. I love Howard Lindzon’s take. So, maybe Goldman’s got an uphill PR sell. But — they’ve also got Facebook. Watch the narrative change.

(4) Bigger Players, Bigger Bets When Lindzon points out that this is small potatoes for Goldman, he’s not kidding. But now the bigger fish are sniffing around and what started as mutterings about a bubble somewhere in the late fall now seems to be turning into a gold rush. (Doesn’t Google and their adorable $6 billion offer for Groupon seem so quaint right now? Never mind Twitter’s recent $3.7 billion valuation.) These are billion-dollar figures, and they are actually now starting to sound…eensy. As Ray Kurzweil points out, when technology advances it does so exponentially — so it makes sense that the explosion of tech startups would chicken-egg in conjunction with an explosion of investor dollars — not just the usual (and educated!) suspects, but people on the sidelines reading about Facebook in their Time magazines and deciding that maybe the Internet’s not a fad, after all. (Yes. These people do exist, and many of them have a LOT of money.) High valuations, big deals, young companies getting scooped up — it’s gonna be a dizzying year.

(5) Sympathy For The Google. It’s official: Facebook has gone from underdog challenger of the mighty Google to the top social-tech dog. So watch for everyone to start rooting for Google again. After a wave of backlash (see here and here), the pendulum will swing back around to rooting for the loveable search giant with the cuddly name. Google can take your pity – its market valuation is almost four times Facebook’s at $190 billion, and its current year revenue is about $22 billion to Facebook’s $2 billion. Back to Lindzon: “I think that Google has to buy Twitter and that will start to be a meme soon. It’s a chess game and nuclear war now in the social space.” That sound you hear is the sound of the tech press collectively wetting itself. Ew. But still — everyone likes to root for an exciting matchup. Expect to see some bold moves from Google, soon — if they’re smart. Big “if” (RIP Google Buzz). But isn’t that how underdogs like it?

(6) New Facebook Ad Models. All that said…Facebook has made a big point about how it hasn’t really focused on the silliness of “making money” yet, despite that $2 billion annual rev and nearly 1 trillion display ads per year. I believe them — can they really not do better than targeted ads for Jewish singles in your area? You bet they can: They also make a point about knowing every little bit of information about you for the ultimate in micro-targeting. The online ad industry is evolving and innovating right along with the rest of the web (see AdKeeper) and the key to dominating going forward will be data — using it wisely to convert your users into dollars for advertisers. This is where smart technology will take user data and figure out how to map it on top of shopping data, so that purchasing intent can best be harvested. The stigma about buying online has now pretty much disappeared. With more people using the web, and mobile devices, more often do run more of their lives, there are big bucks at stake. And I’m not even TALKING about how Facebook is looking to horn in on search.

(7) New Facebook Business Models. They have all these users. All this data. They’d be crazy just to stick with what they’ve got. Hell, now they’ve got fun money just to fling up into the air and see where it goes. They’re poaching the best and brightest who all gush on and on about how “exciting” and “creative” and “free” it is. Clearly these people are getting to work on some fun stuff. So far Facebook has shown itself as adept at replicating the innovations of its competitors (see: Foursquare –> Facebook Places). But with all the resources at their disposal and innovations happening across every industry on every platform, they’d be nuts not to at least test the waters. Hey, that car’s not gonna drive itself. Oh, wait.

(8) People Generally Freaking Out This has already started to happen. First Groupon (“What? But they AREN’T EVEN A TECH COMPANY!!!”) and now Super-Sized Facebook. Entrepreneurs and founders and people with fledgling ideas that are half-built that they’ve been slaving over at night are obsessing about all day are suddenly freaking out that they have to get to market NOW before the bubble pops and the money dries up. Chill out, dude. (And, ladies!) If you’re making something of value, it’ll take. Just focus on it, be smart, and don’t let Twitter and TechCrunch freak you out. (Here, take some advice from these people.) Just a moment of Zen amidst the craziness. All right, now – onward! It’s 2011 and YOU’D BETTER NOT SCREW THIS UP. Haa, just kidding. Mostly.

Well: It should be interesting. Happy New Year, everybody!

Illustration of Mark Zuckerberg as Avatar-ized Time Person of the Year from Sandbox World (via Boing Boing) (hat tip: Bnter).