Facebook: The Loose Cannon Cop Who Doesn’t Play by the Rules 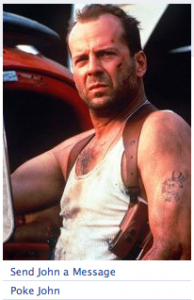 Trend piece alert! As Facebook has become a bigger part of everyday life ands its reach has grown to more than 300 million users, it has taken on an increasingly large role in criminal investigations. It’s helped nab some crooks who would have gotten away otherwise, but there’s so much information available on Facebook, it occasionally leads to regrettable false positives, catching innocent people.

[The victim] told police that someone had broken into her home through a bedroom window.

There were open cabinets in her garage, and other signs of a burglar.

The victim later noticed that the intruder also used her computer to check his Facebook status, and his account was still open when she checked the computer.

But sometimes, information from Facebook bubbles up in overly aggressive or misleading ways:

Though it’s great when it leads to the delivery of justice, it’s a little unsettling that there’s so much private information out there on a for-profit site. Then again, almost all of it comes from the users — or perps — themselves.