Days before he went on a shooting spree in Copenhagen that left two dead and many wounded, Omar El-Hussein took advantage of Facebook’s new “Legacy” feature and created his own memorial page, essentially leveraging Facebook and turning it into a potential shrine for terrorist martyrs.

The “Legacy” feature was announced last week and basically works like this: when you die, you can let a friend or relative inherit your account and turn it into a “digital gravestone,” according to the Wall Street Journal. “Legacy contacts can write a post to display at the top of their friend’s memorialized profile page, change the friend’s profile picture, and even respond to new friend requests on behalf of the deceased,” they write, but add that “They can’t edit what the deceased has already posted, or what his or her friends post on the page.”

Which makes El-Hussein’s page, screencapped by Vocativ, kind of controversial: 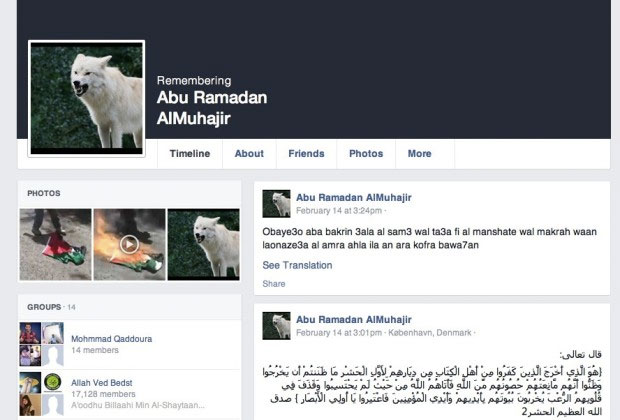 The Daily Mail notes that El-Hussein changed his name to his jihadi name, Abu Ramadan al-Muhajir, said that he worked for “Murder, Inc.,” and swore allegiance to ISIS in his last Facebook posts:

It also emerged that El-Hussein posted a video on Facebook called the ‘Sword of Jihad’ 45 minutes before his first attack.

The footage is of an Arabic song, which says: ‘Soon, soon, will see the indescribable. Our purpose is to destroy you, therefore the sword has been made sharp. We will come to you with slaughter and death.’

And nine minutes before his first attack he wrote: ‘I swear allegiance to Abu Bakr and will obey him in adversity and prosperity, and will not go against the orders I get assigned, unless I witness blatant disbelief.’ Abu Bakr al-Baghdadi is the head of Islamic State.

Facebook quickly deleted the page in accordance of their policy of deleting terrorist-related accounts, but Vocativ notes that his legacy contact probably has the page saved somewhere.