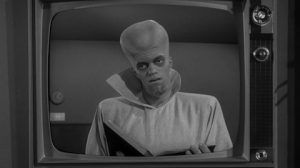 Yes, it’s the best time of the year for those of us who love the classic Rod Serling-helmed episodes of The Twilight Zone: the annual New Year’s Marathon on Syfy. The must-watch event historically has aired back-to-back episodes of the thrilling TV classic all day and night on December 31st and January 1st each year, but this weekend fans of the series will be in for a twist.

For the first time ever, Syfy is allowing fans to actually vote for the top episodes that will air on Sunday January 1st in primetime; 6 half-hour slots are being kept open, and the episodes that will fill them will be determined via a 15-minute voting window on Twitter.

Starting at 7:30/6:30c, viewers can cast their votes for one of two competing episodes by tweeting the specially created episode hashtags to the official Syfy handle, @Syfy. In all, 12 episodes will be in contention for 6 slots, with the winning episodes airing immediately following a 15-minute voting window.

The block of available episodes begins Sunday night at 8 p.m. EST and will go until 11 p.m. EST.

The full marathon begins on Saturday, December 31st at 6 a.m. with “Twilight Zone — The Movie,” the 1983 film from John Landis, Steven Spielberg, Joe Dante, and George Miller. The regularly-schedule episodes will begin promptly at 8 a.m. EST following the conclusion of the movie.

So what will get the nod for Sunday’s primetime lineup? Likely, we can expect to see fan-favorite episodes like “Nightmare at 20,000 Feet” with William Shatner and “To Serve Man” in contention (“IT’S A COOKBOOK!”), as well as my favorite episode “A Stop at Willoughby.” Check back with Mediaite for the full schedule of the Twilight Zone Marathon episodes.