Ferguson Officer Darren Wilson Gives His Side of the Story, According to Report 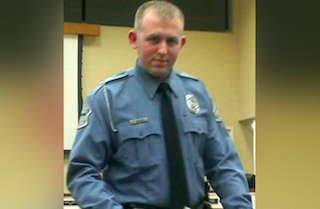 According to Wilson, Brown pinned him in his police cruiser and reached for his gun. This caused Wilson, who said he was in fear for his life, to fire the gun twice. One of those shots hit Brown in the arm, while the other missed him. Wilson also said Brown “punched and scratched him repeatedly, leaving swelling on his face and cuts on his neck.” The report says forensic analysis showed Brown’s blood on the gun, inside Wilson’s car, and on Wilson’s uniform.

The Times report does not, however, provide an explanation as to why Wilson shot Brown six times upon exiting his police cruiser.

While the federal probe is ongoing, the Times reported, there is no evidence yet to bring about civil rights charges against Wilson.

This is the first public account of Wilson’s side of the story, and the Times report attributed all claims to government officials who were briefed on the ongoing federal civil rights investigation.

Al Sharpton has already reacted to the story, calling it into serious question.

Watch the report from CNN, below: