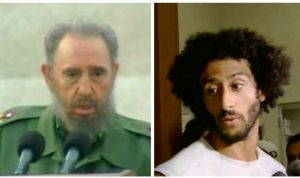 Being that this was THE big news of the day, it was natural that everyone would jump on Twitter to give their take on longtime Cuban leader Fidel Castro’s death on Saturday.

Lawmakers, political leaders, media figures and everyone in between grabbed their phones and tried to express their opinions within 140 characters.

We’ve already highlighted the reactions of President-elect Donald Trump and former Arkansas Governor Mike Huckabee. Here are the best of the rest:

Trump says he's no fan of Fidel Castro. He prefers his dictators to be clean shaven and in a suit like Vladimir Putin

Believe it or not, Donald Trump did a better job marking the death of Fidel Castro than either Justin Trudeau or Jean-Claude Juncker have.

Pres Obama's statement on Fidel's death carefully-worded to avoid condemnations of his decades of dictatorship.

It is true that Fidel Castro raised literacy rates across Cuba. It is also true that he severely restricted what the people could read.

The outpouring of praise for Fidel Castro is tragic.he was a relentless dictator who imprisoned thousands, killed and tortured many Cubans.

Now that Fidel is gone, U.S. should press hard against Raul and support the Cuban people until he provides basic rights and freedoms to all.

Impossible to take seriously people who think Trump is a threat to freedom when they praise Fidel Castro.

Will we get "Fidel Castro is still dead!" tweets later in Trump's reign? https://t.co/HcVsdpcwNJ

Take note of the pundits who today denounce Fidel Castro and later will praise Henry Kissinger when he finally croaks.

Fidel Castro is dead. I hope Colin Kaepernick is ok.

Fidel Castro's own daughter said "dictator" was too kind a word to describe him. She preferred "tyrant."

Many things in international affairs are complex. That Fidel Castro was both evil & an enemy of the U.S. is one of the easy ones.