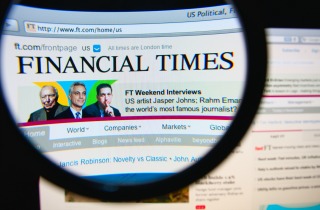 Hours after 12 editors and cartoonists at the French satirical magazine Charlie Hebdo were executed by Islamic extremists, the Financial Times‘s editorial board published a strongly-worded editorial criticizing the magazine for their “editorial foolishness.”

“If the magazine stops just short of outright insults, it is nevertheless not the most convincing champion of the principle of freedom of speech,” the London paper wrote (subscription only), noting Charlie Hebdo‘s long history of needling Muslims, Catholics, Jews, and pretty much everyone in existence. But they added: “France is the land of Voltaire, but too often editorial foolishness has prevailed at Charlie Hebdo.”

This is not in the slightest to condone the murderers, who must be caught and punished, or to suggest that freedom of expression should not extend to satirical portrayals of religion. It is merely to say that some common sense would be useful at publications such as Charlie Hebdo, and Denmark’s Jyllands-Posten, which purport to strike a blow for freedom when they provoke Muslims, but are actually just being stupid.

The Financial Times added that their actions, and the resulting terrorist attack, would only serve to stoke anti-Islamic sentiment in France. “Anti-Islamism forms part of the electoral appeal of a party that topped the polls in May in France’s European Parliament elections,” they noted.

Charlie Hebdo‘s offices were firebombed in 2011 for publishing an image of the Prophet Muhammad as its “guest editor” on its cover, right around the time that Innocence of Muslims sparked mass protests for its offensive portrayal of Muslims.