Fire All the Headline Writers: A Bridge Too Far over Troubled Waters to Nowhere

Fire All the Headline Writers: A Bridge Too Far over Troubled Waters to Nowhere 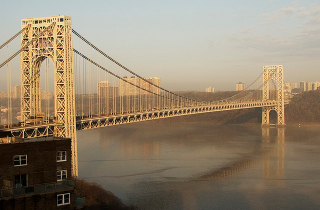 Yesterday a series of uncovered emails from his staff implicated New Jersey Gov. Chris Christie in a politically-motivated act of retribution. The emails, first reported by the Bergen Record, suggest Christie and his staff purposefully designed a traffic jam on the Jersey side of the Washington Bridge over a few days in September in order to stick it to Fort Lee Mayor Mark Sokolich for not endorsing Christie’s reelection campaign. Naturally, the press has seized upon the story since Christie had long been seen as a strong candidate for the 2016 presidential election, and it has resulted in some fine reporting on a clearly troubling scandal, one that’s been galvanized by a marathon-length press conference today from Christie, who said he was “embarrassed and humiliated” and “blinded-sided” by his staff’s actions.

Not surprisingly, most of these stories have come screeching under a series of cliched and predictably trite punning headlines, because headlines are broken and the people who write them think you’re an idiot who can’t be trusted.

And that’s leaving out the dozens of lesser-known blogs repeating the line.

That’s not all. MSNBC double-dipped, also going with “Bridge over troubled water for Christie,” an allusion CNN used as well, as did the Los Angeles Times, and many others.

There are other bridge idioms of course. “If You Believe Chris Christie Still Has a Chance to be President, I’ve Got a (GW) Bridge to Sell You,” the Huffington Post headlined today. “Chris Christie Has a Bridge Story to Sell You,” wrote Politico. “I’ve Got A Bridge to Sell” joked the Trentonian. Ok, but why? It’s not even the same bridge from the old joke. And no one is actually selling a bridge here. What’s the connection besides one key word?

Why not “The Bridges of Bergen County,” or “#BikiniBridge”? Those both have the word bridge in them.

Elsewhere “The Bridge Over the River Hubris,” was the Daily Kos offering. That doesn’t even make any sense. Who is served by that sort of reference? It essentially just lets the publication announce “I’ve seen a movie” so that readers can think to themselves “I too have seen a movie!” SAME. I don’t even want to Google “water under the bridge.” At least Philly.com, the Daily Caller, and New York magazine alluded to another political scandal in their “A Bridge to Nowhere” headlines, which is downright esoteric comparatively speaking.

Much has been made of late about the new style of click-bait headlines plaguing the internet, the ones that withhold information in order to create an irresistible sense of mystery and wonder, or promise life-changing revelations held within. But lost in the shuffle is just how pandering and empty traditional headline writing is. Puns, rhymes, and allusions have long been a staple of headlines, but there’s still no reasonable explanation for why that is. This is something I’ve written about before, but it’s clearly a problem that hasn’t subsided. Do editors picture readers waiting passively for an idiom they’ve heard of to come across the wire in order for them to become engaged? “Welp, that seems like an interesting story, but can you lube me up with a pop culture reference too before fucking me with news?”

Granted, most readers are stupid, but wouldn’t a story about corruption of this sort from a national figure work on its own without resorting to goofy cliches? Starting the interaction off with a cheap gag infects the content of the news story with a sense of grab-assing that gives readers tacit permission to view everything as just for shits-and-giggles. Ho ho, what a gas this political scandal is!

What’s worse, by resorting to the literal first thing that comes to mind, editors risk heading their reporters’ work with the exact same title as their competitors. How is this not a bigger concern in an time when differentiating your publication is of primary concern? Here’s a lesson: if the joke you’re currently filing took you thirty seconds to think of, odds are it took 100 other people ten.

At the risk of lumping every single headline writer in the country together here, you’re all lazy and making us stupider. If saying that means I’ll end up burning a few bridges, then I’ll cross that bridge when I come to it.

— —
Luke O’Neil is a self-loathing journalist and blogger in Boston whose work has appeared in Esquire, Slate, The New Republic and many others. Follow him on Twitter (@lukeoneil47)