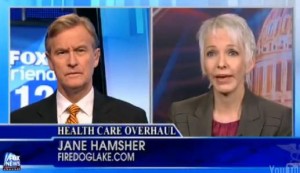 Liberal blog Firedoglake is embroiled in a mini-blogwar with the founder of spoof site The Drudge Retort over questions surrounding FDL PAC’s expenditures. FDL founder and unlikely Fox News darling Jane Hamsher became a polarizing figure on the left when she jumped ship on health care reform, and this report smacks of payback. The implication is that Hamsher is lining her own pockets at the expense of PAC donors.

While the conflict has spilled over onto Twitter, is there any fire to go along with all the smoke?

In the interest of full disclosure, I was among those who felt that Hamsher’s self-serving, self-contradictory opposition of health care reform smacked of dishonesty. I also don’t have much use for her website, which has so far managed to horribly botch the facts in 2 out of 2 stories it has written about me.

Having said that, Drudge Retort founder Rogers Cadenhead doesn’t seem to have the goods on Hamsher. While it is illuminating to see how the FEC shows the PAC money being spent, it all seems to match up pretty well with Hamsher’s own disclosure. It would have been nice if Hamsher had given Cadenhead the more detailed information he sought, but the sums in question here are relatively minor, and Hamsher’s explanations are credible.

Cadenfield also raised questions about Accountability Now PAC, to which Glenn Greenwald responded at great length. In his response, Greenwald assesses the motivation behind this report:

This smear comes from one place: blogs that are devoted to revering Barack Obama and despising anyone who speaks ill of him. Just like Bush followers invariably tried to slime the personal credibility of anyone who dissented from their movement (Richard Clarke, Joe Wilson, Paul O’Neill, David Frum), the real purpose of this is to try to smear Jane Hamsher (and, much more distantly, me) for the Crime of Speaking Ill of the Leader. If enough money signs are thrown around enough times with her name, Obama cultists who view her as a Traitor will declare that some great impropriety has taken place.

On the other hand, Firedoglake’s a FDL reader/diarist’s vitriolic response was uncalled-for, yet characteristic. Rather than address Cadenfield’s post substantively, they set out to prove the guy is a nobody. Kinda flies in the face of that “democratization of the media” that the blogosphere is supposed to be all about, but it’s the predictable go-to for lazy, petulant bloggers.

The rift on the left over health care reform has ended many a friendship, and the glow of victory might not be enough to heal it. Time will tell if the echoes of Hamsher’s ripped from-Fox-News talking points will fade, or if there will be more attacks like this.

Update: Jane Hamsher points out that the blog post responding to Cadenfield was written by a diarist in a FDL reader forum, not a Firedoglake blogger. This is roughly the equivalent of a comment at Mediaite, and not representative of FDL’s editorial viewpoint.

Glenn runs Accountability Now, which is a non-partisan organization, and I run FDL PAC, which is a progressive organization.  FDL PAC went well beyond the level of disclosure required by the FEC, and I’m extraordinarily proud of what we managed to accomplish on a shoestring budget.  There wasn’t one meal, entertainment expense or travel receipt in the report.  Not that there would have been anything wrong if there had been, but between FEC compliance and program costs, there wasn’t a penny to spare.  This was an attack meant to shut down fundraising, no different from the attacks on ACORN or the labor unions by the right.  There are many ways to engage in a political disagreement that don’t involve trying to destroy an organization’s ability to pay its staff a living wage for the work that they do.  This wasn’t one of them.