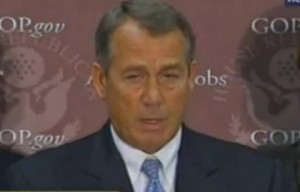 As public pressure mounts on Republicans to abandon their obstinate defense of lower tax rates for the top 2% of income earners, GOP House Speaker John Boehner has been forced to coat that stubbornness in the sugary shell of President Obama‘s tax fairness argument. In a press conference on the ongoing fiscal cliff negotiations Wednesday, Speaker Boehner explicitly argued that his party’s offer of closing loopholes and ending deductions for “the rich” is, in essence, the same as President Obama’s plan to allow top marginal rates for the top 2% to return to Clinton-era levels. Unfortunately, no one is pressing Boehner on the paradox embedded in his argument, a paradox that reveals the GOP’s real plan.

President Obama has drawn a red line at raising top marginal rates on high income-earners, while Republicans insist they won’t budge either, but as one reporter noted at yesterday’s press conference, the President has more than just reelection in his sails. Poll after poll shows that the public overwhelmingly supports the President’s approach to increasing revenue and entitlement reform, and that Republicans will be blamed if no deal is reached by January 1. Given that terrain, the reporter asked, “How long can you afford politically to have those tax cuts?”

Those factors forced Speaker Boehner to try and recast his plan of closing loopholes and deductions as in step with overwhelming public opinion, but listen to how he does it:

“America faces a very serious problem, and our goal is to make sure it gets solved. We have a debt problem that is out of control. We have got to cut spending, and I believe that it is appropriate to put revenues on the table. Now, the revenues we are putting on the table are going to come from, guess who? The rich. There are ways to limit deductions, close loopholes and have the same people pay more — more of their money to the federal government, without raising the tax rates, which we believe will harm our economy.”

While political observers like Chris Matthews are heartened to hear Speaker Boehner embrace the idea of tax fairness, no one is asking the obvious question: if closing loopholes and limiting deductions raises the same amount of money (whatever that amount is, it will eventually have to be agreed to), from the same people, as raising tax rates does, how can one approach be harmful to the economy, as Boehner says, and not the other?

There’s only one real answer (it can’t be), but there are three possible reasons for Speaker Boehner to say that. The first is that he’s just being stubborn, defending his tomato from President Obama’s tomahto. The second is that his plan won’t really get revenues only from the rich, but will also have to hit middle class Americans in order to achieve the necessary deficit reduction.

The third reason, though, is that the Republicans’ best-case scenario, is that those revenues never actually end up being extracted from the rich. The Republican counter-offer to President Obama’s fiscal cliff plan calls for immediate cuts to Medicare and Medicaid, with a promise that those loopholes and deductions (not specified, which sounds familiar) be part of some tax reform that gets done later.

Back in my day, the procedure for purchasing marijuana (I am told) was for the purchaser to hold his money in one hand, while the seller held the package of marijuana in the opposite hand, at which point a comically simultaneous exchange would occur. What Speaker Boehner’s offer constitutes is a request to take possession of the dime-bag now, with a promise of later remuneration, at which time Boehner can plead poverty, offer the three dollars he has in his wallet, or simply avoid his debt altogether by hiding in his locker. Perhaps Boehner is well-intentioned, and honestly believes he can turn that dime-bag, replete with seeds, into a fortune that will take care of that debt by itself, a scheme that has never worked before, and would not have been agreed to had it been explained at the time of the transaction.