Flashback: What Tipper Gore Wrote About Prince’s ‘Vulgar Lyrics’ Back in ’87

Flashback: What Tipper Gore Wrote About Prince’s ‘Vulgar Lyrics’ Back in ’87 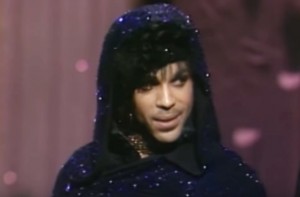 Today was a day to remember Prince as one of the most iconic and masterful performers of all-time, but the subject matter he tackled in his songs made Prince the center of a fierce culture war battle mere decades ago.

Back in the mid-80’s, there was great concern over music corrupting the souls of America’s precious youth, and Tipper Gore, wife of then-Senator Al Gore, formed the Parents Music Resource Center to push for greater oversight on the music industry.

There was a whole Senate hearing about the matter featuring testimony from Frank Zappa, John Denver, and Dee Snider.

That list dropped in 1985, but two years later in her book Raising PG Kids in a X Rated Society, Gore wrote about how shocked, SHOCKED she was by the lyrics (via Reason):

In December 1984, I purchased Prince’s best-selling album Purple Rain for my 11-year-old daughter… When we brought the album home, out it on our stereo, and listened to it together, we heard the words to… “Darling Nikki”: “I knew a girl named Nikki/guess [you] could say she was a sex fiend/I met her in a hotel lobby/Masturbating with a magazine.” The song went on and on, in a similar manner. I couldn’t believe my ears! The vulgar lyrics embarrassed both of us. At first, I was stunned—then I got mad!

And that apparently got her on the issue of explicit music in the first place, leading to her putting together the PMRC.